At Spear Education we have worked very hard with clinicians like you to develop a unique platform that helps dentists and their staff to not only improve their clinical skills but also to more effectively communicate with their patients.

Recently we worked with an independent consumer research group to help us better understand what patients are thinking when they are sitting in the operatory. What we learned was eye-opening, proving out some things we intuitively believed for years while providing surprising new insights on how patients perceive procedures and interpret case presentations.

One of the most interesting things to come out of this were the discussions around root canal therapy.  This procedure more than any other produced an instinctive visceral reaction by patients and led to a number of interesting insights about how this and other dental procures are viewed.

Who Were the Dental Patients?

The focus group participants had to match similar thresholds to qualify to participate but it was broken into two groups. The first group comprised people from 25 to 40 years old, while the second group was made up of people over 40. Both groups were facilitated by the research team while we observed in a separate room behind a two-way mirror.

The groups were split equally between men and women and their dental experience varied wildly. In the younger group, there was less experience with dental work but one person had a trauma reconstruction, two people had root canals, one had four-quadrant scaling and root planning, and three had multiple crowns.

In the over-40 group, everyone had experienced some sort of advanced procedure, including implants (one with bone and tissue grafts), lower-arch reconstruction due to wear, appliance therapy, multiple endodontic treatments and extractions.

The occupations of the groups varied in line with the survey, and the percentage of those people who had dental insurance was also consistent.

Their general attitudes about dentistry ranged from fear to apathy to extreme loyalty for their particular clinician. 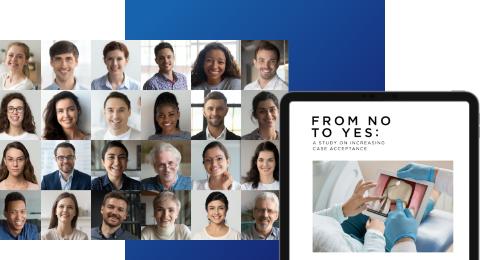 From No to Yes: Increasing Case Acceptance

From No to Yes: Increasing Case Acceptance

One thing that was interesting was that the group for the most part recognized that dental insurance was a cost mitigation tool and not true insurance. There was annoyance at the insurance companies and an understanding that most of their dental expenses would come out of pocket.

The focus groups had very interesting insights on how they were presented treatment. When the groups described how treatment had been presented to them previously, they primarily described just being told what the procedure was and that they needed it. In each group, two or three people described being shown radiographs of a problem as part of the presentation. Two participants described their dentist sketching out some things on a piece of paper.

Everyone said that if they did not accept treatment right away, they “googled” the recommended procedures when they got home.

While does not technically fall under “treatment presentation,” it is worth noting that both groups adamantly expressed that being shown how to brush on large plastic teeth was condescending. All participants in both groups said they did not like it and that it was appropriate for children but not adults.

What We Learned About Root Canal Therapy 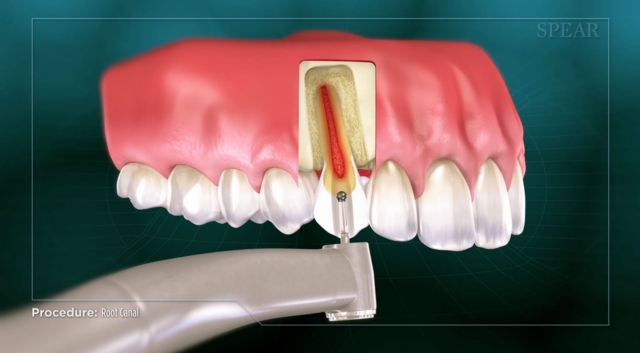 Part of our goal in conducting this research was to test the Spear Patient Education platform’s animated videos. Our goal was to ensure that we created a patient-centered product that helped the clinician to start meaningful conversations about treatment options.

As we know, the idea of a root canal, while not actually that terrifying, is for some reason feared by patients quite a bit. In popular culture, it tends to be the benchmark against which undesirable life events are measured (e.g. “I’d rather have a root canal than have to drive in that traffic again!”)

Fortunately, what we saw in the survey results about the Patient Education videos was exciting. Of the people surveyed, 62 percent felt motivated to undergo treatment and 84 percent felt the educational value of the animation was excellent or very good. In addition, the comments provided interesting insights into how to talk to patients about this procedure:

However, the most insightful part came from the focus group. After the group finished watching the root canal video, one participant became agitated. He started off by saying that video was wrong and did not actually show a root canal.

When asked for more details he described his experience this way:

“A root canal is not that one-time thing they showed; it takes several appointments. You go in to your dentist with a toothache they tell you that you need it, then they send you to another dentist who does something that hurts. You have to go back to your dentist. They do a bunch of drilling and you leave with a temporary tooth made out of plastic. Then you have to go back, they do more drilling and you get a final tooth put on. Honestly, it was in the back. I probably should have just had them pull it out.”

This focus group member did not view a “root canal” as single procedure in which the infected tissue was removed. He viewed the RCT, build-up, temporization and crown as all part of a single procedure: “a root canal.” He also did not understand the benefits of saving a tooth nor the consequences of creating edentulous space.

Being part of the dental community, we think of procedures in more finite terms. “An implant,” for example, can be multiple visits, including soft tissue grafting, site augmentation, sinus lifts and placement. It can also take six months to osseointegrate and we may need long-term temporization to ensure occlusion is correct. This list goes on, but in the end the results are worth it.

To best help patients understand, we need to step back and think like a novice:

The treatment option presentation does not need to take hours, but the more we can work to educate patients – to help them to understand – the better the outcomes.

By Glen Doyon 8 years ago