Jennifer presented to my office on January 30, 2012. She had consulted with and been treated by an endodontist on July 27, 2011. At that time, Jennifer was symptomatic and endodontic treatment was recommended for tooth #23 to which she agreed. (Figure 1) The treating endodontist advised Jennifer that he could not complete the root canal treatment as he intended and, to his credit, placed calcium hydroxide. (Figure 2) 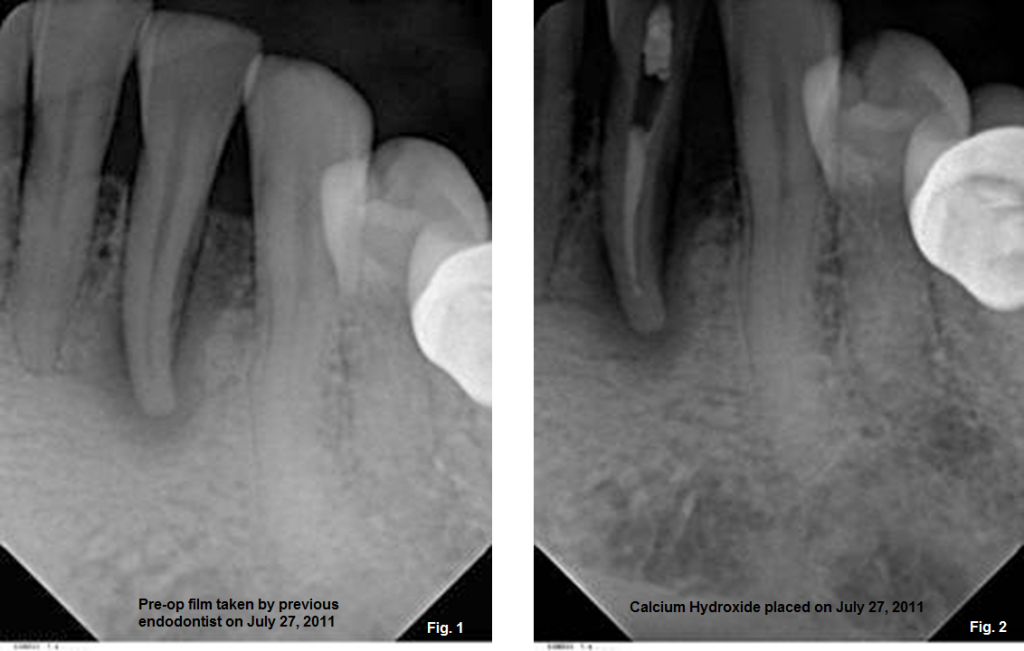 She returned for completion of treatment, gutta percha was placed in the canal space and, I’m guessing, post space was prepared with the access closed with cotton and Cavit. She was told by the treating endodontist that he “couldn’t get to the apex” and she needed to return for surgery.

For reasons unknown, Jennifer did not have a positive experience and was reluctant to return until her general dentist referred her once again in January 2012 telling her that she needed surgical treatment. (Figure 3) Remarkably, the endodontist reiterated the need for apical surgery!

I’d like to introduce the term: process outcome. A process outcome is the result of something we do and may have little or no meaning to the patient. Putting material into a tooth to see white lines on an x-ray is a process outcome. In Jennifer’s case, the endodontist felt that his process outcome was inadequate and totally missed the forest for the trees! 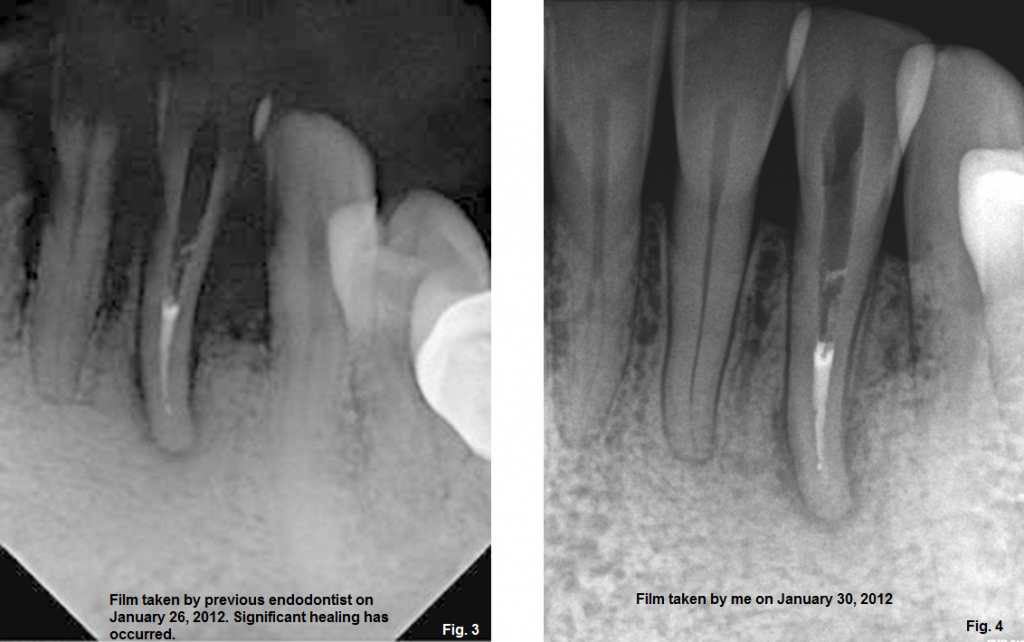 Look at his pre-op film from July 27, 2011, and the film that was taken by him on January 26, 2012. Was there any reason to recommend apical surgery at this time? Jennifer was uncomfortable with the surgical treatment recommended and sought a second opinion, which was how I met her on January 30, 2012. In defense of the general dentist, I am sure he was following up with the endodontist's recommendation and was reluctant to restore until he received the endodontist's seal of approval.

After interviewing Jennifer, I took a film (Figure 4) and a CBCT scan. Despite the completely open and contaminated access, canal (Figure 5), and marginal process outcome of the previous endodontic treatment, Jennifer told me she was and has been asymptomatic since after the initial treatment. I told Jennifer I was reluctant to make a treatment recommendation until I obtained the previous treatment history and films. 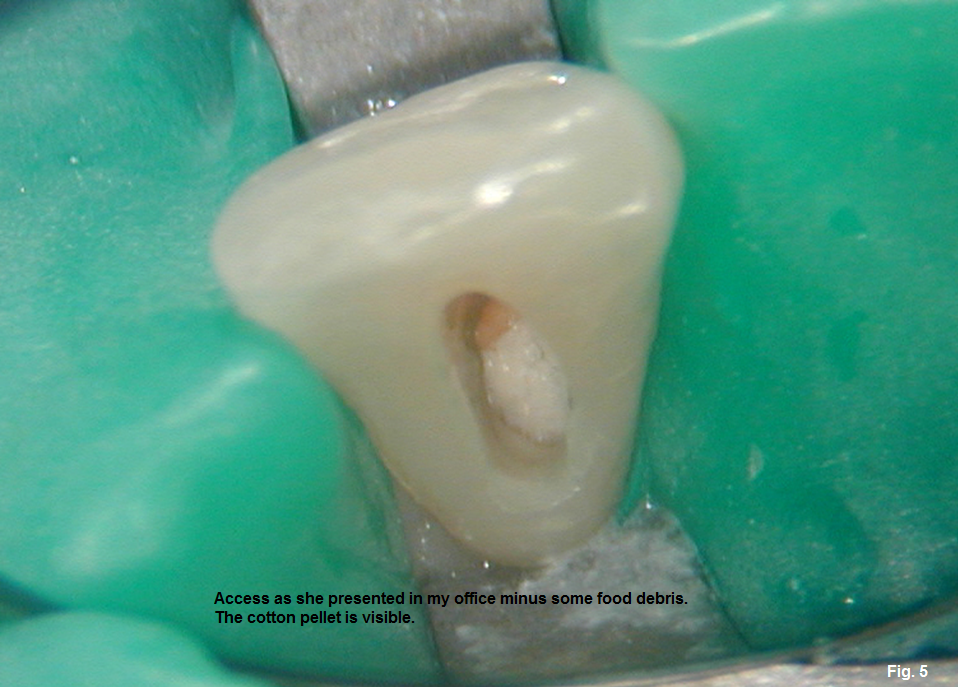 After obtaining the radiographs, it was clear that the current radiographic and clinical presentation suggested that Jennifer was healing. Do you think the current disease model in endodontics might require some revision? But I digress.

I recommended retreatment only because the CBCT scan suggested that there was an untreated lingual branch (Figures 6 and 7) AND it was going to be restored – finally. Quite frankly, the treatment was part CYA, and we will never know if I made a significant contribution to the long-term patient-centered outcome by revising the endodontic treatment. 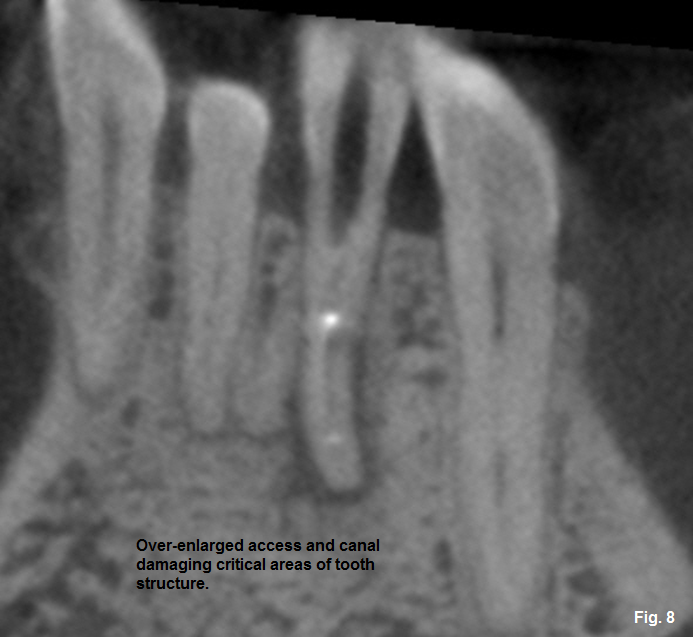 After three visits – one each in February, March and April – I completed the case. (Figure 9) I was not able to achieve patency either; I suspect there was a small piece of a separated stainless steel file lodged in the apical area of the canal, (Figures 6 and 8). Although the process outcome may not be ideal, it is irrelevant, as the patient is asymptomatic, the tooth is in function and the two and a half year follow up film supports the conclusion that no further intervention is necessary or warranted. (Figure 10) Take your time in rendering endodontic treatment and try not to fixate on the process outcome. 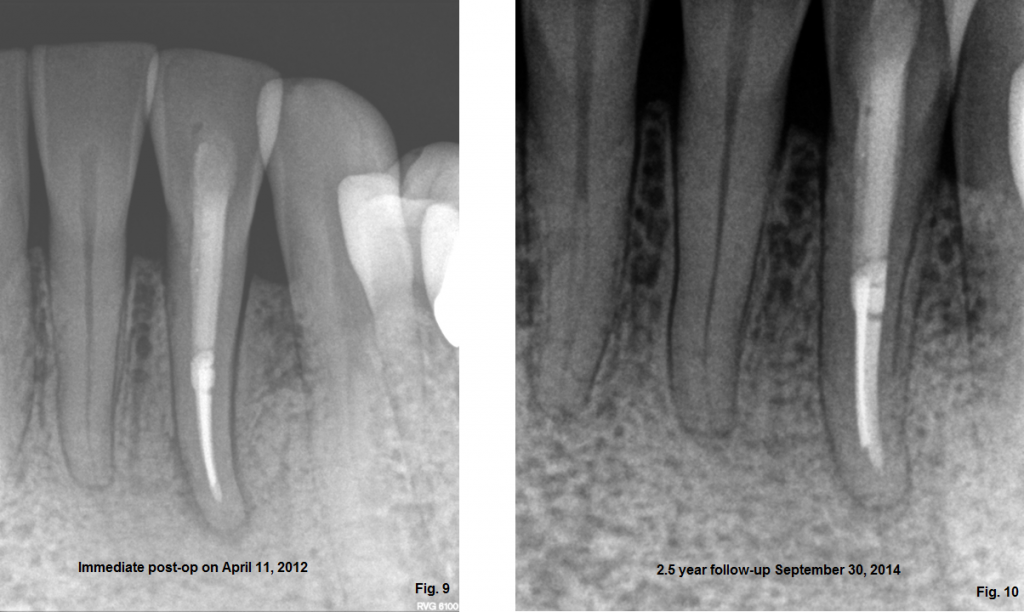 Some final comments about the treatment for your consideration:  I feel that the access is too cervically placed and grossly over enlarged. In addition, I feel that the canal space was grossly overprepared. (Figures 4-6 and 8) I suspect the intention was to prepare the tooth so that a post could be placed in the mistaken belief that this might make the tooth stronger.

No drilling of a tooth, and nothing we place in the tooth as a result of that drilling, makes a tooth stronger. Had the access been properly placed near the incisal to reduce destruction to the pericervical dentin, and had the canal been appropriately instrumented, the post I elected to place in an effort to make the tooth less weak than it was made by over enlarging the canal, would have been unnecessary and the tooth would have been stronger without it! The patient was 44 at the time of treatment. Will this tooth go the distance?

By Benjamin Rojek 7 years ago