Unraveling the Mysteries of Extensive Tooth Wear: Part I 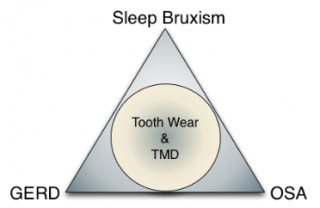 Extensive tooth wear is often the result of a triad of three underlying interconnected conditions: Sleep Bruxism (SB), Gastroesophageal reflux disease (GERD) and Obstructive Sleep Apnea (OSA). A checklist of signs and symptoms provided for each of these conditions could help in identifying such patients.

Sleep Bruxism [1] Sleep Bruxism is the grinding or clenching of teeth during sleep, which is preceded by sleep arousals. Sleep Arousal is a naturally occurring 3-10 second shift occurring during deep sleep, which is accompanied by an increase in muscle tone. This motor activity causing clenching and grinding activity of jaw muscles is believed to be an attempt to open the constricted airway. Sleep bruxism occurs in multiple episodic bursts throughout the night. Some episodes may produce audible grinding noise. Incidences of Sleep Bruxism is higher in children and then decreases with age. It is found in 8 percent of the general population and 14-20 percent of children. A constricted airway due to Adenoid and tonsil hypertrophy is often the cause for a constricted airway in children, which opens up with age.

Obstructive Sleep Apnea [2] Obstructive Sleep Apnea is characterized by frequent episodes of stopped or very shallow breathing, each lasting 10 seconds or more. It's caused by an obstruction of the upper airway because of inadequate motor tone of the tongue and/or airway dilator muscles. Diagnosis usually requires overnight polysomnography to detect the frequency of apnea (stopped breathing) and hypoapnea (very shallow breathing) events. The apnea-hypoapnea index (AHI) is the average number of disordered breathing events per hour. Typically OSA syndrome is defined as an AHI of five or greater with associated symptoms (e.g., excessive daytime sleepiness, fatigue, etc.) or an AHI of 15 or greater, regardless of associated symptoms. Increased muscle tone and micro arousals caused by sleep apnea events are the trigger factors for sleep bruxism.

GERD [3] GERD is characterized by leak of stomach contents into the esophagus. Typical symptoms are heartburn and regurgitation (the perception of gastric contents moving from the stomach into the esophagus). Sleep Apnea episodes are often implicated as a contributing etiology of GERD and SB. Increased negative pressure in intra thoracic space during apneic episode causes gastric acid to expel into the esophagus. This triggers micro arousals leading to Sleep Bruxism. In Part II, I'll discuss a checklist of warning signs and include a questionnaire.

Dr.Anil Kumar Grover
July 13th, 2013
Not to forget most important "Para Function" : Constant idle chewing of teeth and obvious from Masseteric contractions and temporal muscle movements and clenching :"Oh ! "THINKITIIS" !! OSA,GERD &amp; SB : All related to one's Life Style and Thought Process(ing) to me are result of "THINKITIS" !

Arnie Mirza
July 13th, 2013
Thank you vivek for sharing your knowledge and experience, it is appreciated.

Dr. Jenipher Ober-Oluoch
July 15th, 2013
Thanks Vivek for sharing the information. Am a paediatric dentist and recently encountered a 4 year old girl who had the deciduous dentition worn off to almost the gum level. What management modalities would you embrace in such a case?

Vivek Mehta
July 15th, 2013
1. Identify the underlying cause. The checklist that will be published in part II of this article might be very helpful. 2. Make a "soft nightgaurd" like a bleaching tray for the patient to wear at night. She will have to be monitored and the trays will have to be changed at 6-12 month intervals to accommodate for the growth of the dentition

Vivek Mehta
July 15th, 2013
Arnie, Thank you for the kind words. Please share this info with your friends via Social media, email Again, Thank you very much!!

CARLOS MAS BERMEJO
August 8th, 2013
Thank's Vivek for the synthesis of this so complicated and multifactorial pathology
Read Article

Taking the ‘Voodoo’ Out of Vertical Dimension of Occlusion

Diagnosis and Research of Wear