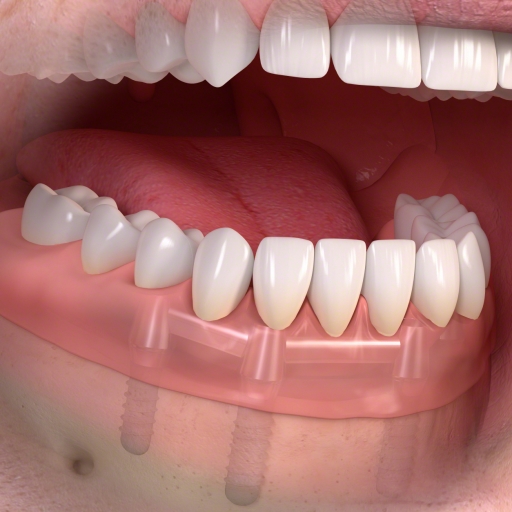 Mandibular flexure has been evaluated using elastomeric impression materials and finite element analysis. Dental implants have served as a reference point due to the rigid connection with the supporting alveolar bone compared to the movement of natural teeth attributed to the periodontal ligament. Typically, the smaller the mandible in terms of volume, the more flexure. When considering that dental implant-supported restorations were initially considered for mal-adaptive denture patients, it would be expected that flexure of the edentulous jaw would be an important factor to consider.

A review article related to mandibular flexure (Law, et. al. 2012) evaluated 20 articles that met their inclusion criteria. Their conclusion was, “The clinical significance of mandibular flexure on the success of dental implant treatment is at this time unclear, and further research is needed”

There has to be more to it than that … Right?

Of course, there is always another side to the debate. Miyamoto, et. al. (2003) concluded that “jaw flexure is a primary cause of posterior implant loss in full arch mandibular prostheses.” This sounds a little more serious.

Dhima, et. al., (2014) published a retrospective evaluation of more than 250 full-arch fixed hybrid (acrylic/denture teeth) prostheses made between 1983 and 1991. Only 15 percent of the prostheses survived free of any event (repair, removal of an implant, etc.). The conclusion was that this type of restoration should be thought of in a chronic condition context. It is interesting to note that dental implant failure over this time frame was recorded at 9 percent.

Korioth & Hannam (1994) created a model for finite element analysis to evaluate mandibular flexure with five functional positions related to tooth contact. The degree of elastic distortion depends on the specific clenching task – intercuspal position, unilateral group function with and without balancing contacts as well as isolated clenching at either the incisal area or the molar area. Specifically, mandibular flexure has been measured to occur in the body or corpus of the mandible, at the gonial angle, and at the neck of the condyles. Jiang (2002) defined the magnitude of movement related to mandibular flexure as being less than the depressible limit of the periodontal membrane (0.2 mm).

The degree of mandibular flexure may be OK with a splinted full arch tooth supported prosthesis, the 0.2mm measured by Jiang (2002) might be enough to create a problem with dental implant supported prostheses. Likely more of a concern for dental implants positioned distal to the mental foramen as a result of the medial flexure of the body/corpus of the mandible.

Can the stiffness of the connecting prostheses counteract mandibular flexure?

Korioth and Johann (1999) evaluated material characteristics and superstructure design for dental implant-supported prostheses with simulated functional movement. A rectangular beam with a longer vertical component resulted in the lowest measured stress at the level of the abutment. The relative stiffness of the superstructure increases with the vertical component resulting in a decreased stress at the abutment level.

Any guidelines to manage flexure of an edentulous mandible?

Mandibular flexure is measureable in three important functional situations: Clenching, Protrusion and Maximum Opening where fracture of the restorative material and/or pain may be a reported finding.

What are your thoughts on managing mandibular flexure??

Effect of the Additional Installation of Implants in the Posterior Region on the Prognosis of Treatment in the Edentulous Mandibular Jaw. Miyamoto, et. al. Clinical Oral Implants Research 14:727-733;2003.

What Motivates You to Treat Edentulous Patients?

By Denise Prichard 7 years ago
Esthetics

Implant Abutments: What Do I Choose?

By Steve Ratcliff 3 years ago