Maintaining Edentulous Spaces … Are There Consequences? 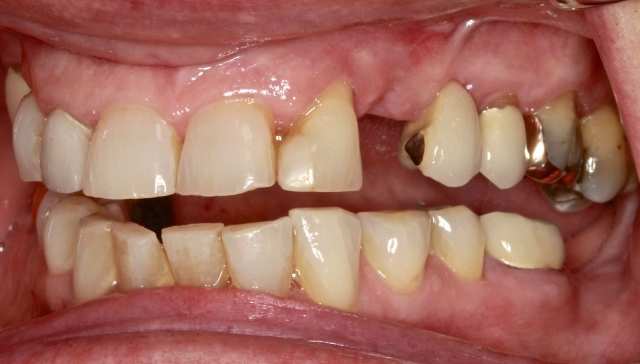 Patients that value dental health are motivated by the consequences of not taking an appropriate action. Taking a tooth or perhaps several teeth out can provide an opportunity to decrease the overall cost of dental treatment. What are some of the risks and potential consequences involved when several adjacent teeth are missing to create an edentulous space?

Eruption of the opposing teeth

Super-eruption of the opposing tooth is a possibility with regular occurrence clinically, however, according to Shugars et. Al., bound edentulous spaces over a median follow up period of 6.9 years did not as a general rule demonstrate adverse consequences when deciding against the replacement of the missing tooth. Deciding when to treat requires subjective patient-specific analysis based somewhat on clinical experience.

It would be unlikely, for example, that super-eruption of the maxillary second molar into the space of a missing mandibular second molar could create a protrusive interference. Anatomically, in terms of supporting bone, concerns arise as to the natural “undercut” of the mandible at the beginning of the retromylohyoid fossa as well as the relatively superior position of the inferior alveolar nerve. The left lateral view of the posterior teeth in the clinical photo shows a super-erupted maxillary second molar.

Presenting an opposing point of view, if the entire posterior segment has super-erupted resulting in limited space available for dental materials, then there is a significant need for dental treatment for the upper and lower arch that clearly could have been avoided with treatment sooner rather than later.

Survival of teeth adjacent to the edentulous space

Certainly, there is an associated bias involved with the choice to restore with a given restoration largely depends on the prognosis of the adjacent teeth to the single missing tooth as well the number and prognosis of the remaining teeth in the dental arch. Take a look at the clinical photo and think about the stress the lateral incisor (#10) is taking on now that the canine has been removed. While the lateral is not depressible in its socket, the mobility classification easily fits the 2+ description.

Survival of the remaining teeth not associated with edentulous space

What about the teeth that are not directly adjacent to the area of missing teeth? It makes sense that when teeth are lost there is less surface area available to distribute the “load” involved in normal chewing forces. Each of the remaining teeth are then required to take on more force than they were designed for the result could include either traumatic periodontal mobility or a structural breakdown of the tooth itself.

“The (ten-year cumulative) survival rates of remaining teeth in both IFD (implant supported fixed restorations) and RPD (removable partial dentures) groups were 40.0% and 26.3%, respectively. Additionally, loss of remaining teeth in RPD group tended to occur relatively earlier (62.5% cases were occurred within three years after insertion of prosthesis) than in IFD group … these findings clearly suggest that IFD treatment has a protective effect of the remaining teeth in patients with large edentulous cases.”

Losing teeth unrelated to the edentulous space would be a motivating consequence!

How do you discuss the options for adding teeth in edentulous spaces?

How Many Implants in the Edentulous Maxilla?

By Doug Benting 5 years ago
Implants

By Steve Ratcliff 6 years ago

Lips and their Impact on Dental Esthetics