While an estimated 30 million Americans were edentulous in one or both jaws in 2001, that number is expected to increase to approximately 38 million by 2020 due to the increase in the aging population [2] [5]. Although such statistics should put this discourse to rest, they present the issue of whether to treat dental patients with dentures or implants, and which are better and for whom.

Not everyone is a candidate for implant dentistry. Patients with a history of uncontrolled diabetes, bisphosphonate use, or certain blood dyscrasias may not be suitable candidates for implant therapies without cooperation of their treating physicians and an understanding of the incumbent risks. Osseointegrated implants require conscientious oral maintenance [6].

Another crucial issue is the amount of bone available for appropriate implant placement and stability. A result of edentulism is the deterioration of the alveolar bone. The integrity of the bone is critical when determining treatment options [7]. There must be sufficient bone structure to consider implants [7]. Augmentation of the bone and ridge may be accomplished with a variety of methods and grafting mediums [8] [9].

There are numerous treatment options for fully edentulous patients today. These include full upper and lower dentures, implant-assisted prostheses, and implant-supported prostheses. 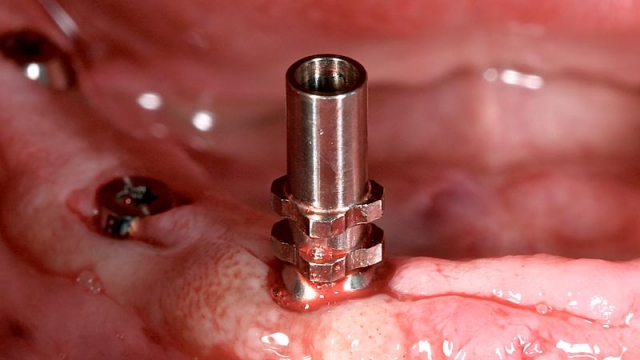 The least complex implant-assisted prosthesis is the two-implant lower overdenture with locator connections or a bar. Designed with female attachments on the implant and male attachments on the inside of the denture, the attachments fit together to provide retention. However, bone and soft tissue are responsible for most of the support. With the bar design, the bar is attached to fixtures screwed onto the implants. Clips are inserted into the denture and snapped over the bar. Although the denture is able to slightly rotate on the bar, this type of prosthesis provides primary stability and some retention. Both prostheses can be designed with two or four implants.

The maxillary and mandibular arches require a minimum of four implants to minimize rotation and torque, particularly when utilizing locators. Maximizing the distance between the anterior and posterior implants also minimizes rotation. These considerations are the same when utilizing the bar design. The anterior bar should be perpendicular to the midline of the palate to avoid off-centered rotational forces. The bar should not be in front of the implants because it creates abnormal torque. Using two implants and locator attachments is not a suitable treatment for the maxillary arch due to the dislodging effect of biting and the subsequent rotational forces and torque placed on the implants.

The benefit of an implant-assisted prosthesis is that it's removable and, therefore, easy to clean, especially for patients lax with their oral hygiene. Because they require fewer implants, there is less surgery, less technical demand for the dentists, and costs can be lower. Esthetics can often be easier to achieve and the patient can receive the prosthesis faster.

On the other hand, not everyone prefers removable appliances. The flange may obstruct the esthetics. Internal attachments, particularly locators, need to be replaced every six months to two years, depending upon the patient and location of the implants. If utilizing a bar design, the patient will need to floss and maintain effective oral hygiene.

An implant-supported prosthesis is an implant on top of a milled bar, implants that support a hybrid, or eight to 10 implants using fixed bridgework. The milled bar is screwed into place, and the four to six implant prosthesis, the intaglio of the denture, is shaped to the bar. Some are designed with passive attachments, a push-button lever that snaps into a receptacle on the bar. A very solid design, the patient will have no movement with this prosthesis.

A hybrid prosthesis consists of a custom-milled titanium or zirconia bar, milled from an implant level impression or from a multi-base abutment impression. The denture teeth are fabricated over the top. Minimum diameter screw access holes do not jeopardize the integrity of the teeth or the prosthesis and result in minimal breakage.

There are several ways to provide a fixed implant-supported prosthesis. Implants can be placed in the molars, premolars, canines, and central sites with four bridges; a three-bridge design would consist of two posterior bridges and a six-unit anterior bridge. A bridge between canine and premolar with a pontic on a premolar and a cantilevered molar, with cantilevered laterals off the central incisors is an option, or a six-unit anterior bridge from canine to canine with splinted premolars and a cantilevered molar. According to the literature, a prosthesis cannot support a cantilever exceeding 1.5 times the anterior/posterior (AP) spread, which is the distance between the middle of the most anterior implants and the distal of the most posterior implants, without creating excessive stress on the implants or on the frame of the prosthesis (i.e., for an AP spread of 10 mm, the cantilever should not exceed 15 mm) [10].

Implant-supported prostheses can be fixed, or in the case of the bar-retained overdenture, attached and unmovable. Often, they don’t require a flange because the support comes from the implants. More implants provide greater stability, and when they're fixed, as in a hybrid, or cemented, they perform like natural teeth. Hybrids and fixed prostheses can be less intrusive due to the elimination of the bar or framework.

There is a higher cost associated with implant-supported prostheses because they involve more implants and, therefore, more surgery, particularly if significant grafting is required. Those screwed into place or cemented are harder to clean. Treating a gummy smile may require significant bone removal to hide the margin of the prosthesis, which may require pink porcelain to avoid abnormally long teeth.

Indications for Immediate Placement in an Edentulous Arch

To place immediately loaded long-term provisional, adequate horizontal and vertical bone height is required to ensure primary implant stability. Primary stability of the implant means that the implant is stable to torque of 35 ncm. That can occur with 4mm of vertical bone height in dense bone. If four implants are available to load in the arch, long-term provisionals are suitable treatments, provided the AP spread is correct. If these parameters cannot be met, then immediately loaded long-term provisionals should not be considered as a treatment option.

A 50-year-old man presented with a hopeless dentition secondary to severe periodontal disease. Additionally the radiographs indicated bilateral pneumatized sinuses (Fig. 1, 2). The patient had smoked for nearly 45 years and neglected his oral health and there was evidence of past parafunctional habits present. He presented with severe horizontal and vertical bone loss due to the periodontitis, complicating potential implant solutions.

Treatment planning for a patient who will be rendered edentulous is no different than that of a dentate patient. The first step is the esthetic analysis and determination of tooth position (Fig 3). This planning process will help in the fabrication of both the provisional and final restorations. Obviously, this patient has severe attachment loss and his teeth now appear long. Understanding the correct tooth position will help in selecting teeth for an interim prosthesis. This planning process is shared with the laboratory and all specialists who may be involved as well as the patient.

The patient had no muscle symptoms or discomfort, and his temporomandibular joints were healthy and functioned normally.

Consultation with the periodontist treating the case, review of the cone beam CT and discussion with the patient lead to a treatment plan that included extracting all remaining teeth, grafting of the extraction sites for site enhancement, delivery of immediate interim full upper and lower dentures followed by placement of six implants in each arch with immediate loading of long-term provisionals and later conversion to upper and lower hybrid prosthesis.

The initial therapy, due to the extreme loss of bony architecture, was extraction of all remaining teeth and grafting of the extraction sites (Fig. 4), and interim dentures being placed. The interim dentures needed to be relined periodically using a soft liner material (Permasoft, Perma Laboratories). At about four months for the lower arch, the patient had healed enough for implant placement and the long-term provisional prosthesis. A guided surgery protocol was chosen for accuracy of implant placement and to facilitate delivery of the long term, immediately loaded provisional. A radiopaque scan denture was fabricated by duplicating the recently relined lower interim denture (Fig. 5).

The scan was completed and used for planning the implant placement and design of the surgical guide and long-term provisional (Fig. 6).

The long term provisional was designed so that it snapped into a clear carrier. The carrier allows the provisional to be taken to the mouth and stabilized while it is luted to a temporary abutment on a single implant. At the same time, a surgical guide that fits over the ridge and can be attached with bone screws was also fabricated. The guide is fabricated with color-coded metal sleeves that match surgical drill sizes and allows precise placement of the implant in three dimensions (Fig. 7).

A temporary abutment was screwed into a single implant (Fig. 9). The carrier with the long-term provisional snapped in place was seated over the temporary abutment, which was shortened to keep it from protruding from the surface of the provisional. While biting pressure was put on the denture to keep it from moving, dual-cure Pink Triad (Dentsply) was injected into one of the implant access holes (Fig. 10). As the resin was light-cured to an initial set, the patient bit down on the denture to stabilize it, and the remainder of the dual-cure Pink Triad auto-polymerized. After being held in place for five minutes, the temporary abutment and the carrier were removed.

The provisional was then screwed back onto the single implant and the five additional temporary abutments inserted in the same manner. Teflon plumbers tape was inserted into the abutment holes, the holes were filled with more light-cured Triad material, and the bite finalized.

At a later date, the procedure was repeated for the upper arch. The carrier was tried-in against the lower long-term provisional to verify the bite. The implants were placed, multibase abutments were placed on top of the implants, and the temporary abutments screwed onto the abutments (Fig. 11).

Converting to the Hybrid

An open-tray impression technique on multi-base (rotational) abutments was used to convert the upper and lower hybrids. Implant transfer posts were screwed onto the multi-based abutments. The impression was made (Fig. 12). The transfer abutments were unscrewed to remove the impression. A model was poured that included the soft tissue model with multi-based analogs to duplicate exactly what it would look like in the mouth. A verification jig was fabricated on the final model (Fig. 13). At this point decisions are made regarding framework and tooth selection. A design for a milled titanium framework was created using CAD/CAM technology and the bar milled. Jaw records were made using screw retained bite rims made from on the final impressions, just as would be done with conventional denture techniques. The final prosthesis is delivered by placing abutment screws through the openings and then covering the access holes with composite (Fig 14). The prosthesis must be removed at least on an annual basis to be thoroughly cleaned and the screws replaced (Fig. 15, Fig. 16).

Firas D.
July 17th, 2015
Very instructive article, can you please clarify the reason for use of the clear carrier ? Thank you
Read Article

By Steve Ratcliff 6 years ago
Implants

By Greggory Kinzer 3 years ago