So much of what many people call luck is really a matter of seeing opportunities that present themselves and acting on them. Often we have a vision for what we want to accomplish but we don’t connect that vision with the opportunities that present themselves. Our vision in Guatemala, for instance, with the Open Wide Foundation, was always to expand beyond providing immediate dental care relief, make some long-lasting changes in education and provide real hope for changing communities in a meaningful way. As it turns out, an opportunity arose recently for Open Wide to expand its influence in ways that even we as the founders didn’t foresee.

A long-running problem in Guatemala has been corruption, going up to the highest levels of federal government. So in their last election, a well-known TV comedian named Jimmy Morales ran for president. His campaign was no joke, however, and he was brought to power on the promise to end corruption and to initiate programs that would truly help the people. This change in the political landscape presented an opportunity for Open Wide to expand its programs at the national level; now was the time to make our case.

So the Foundation submitted a proposal for a three-tier National Oral Health Care Initiative that included additional permanent dental clinics, a public service announcement national oral health education campaign and an expanded oral health outreach program. And it didn’t hurt that Edwin Escobar, the mayor of the county where our first clinic is and who has been a long-time advocate of Open Wide, was recently re-elected and now serves as the president of Guatemala’s mayors’ association as well as the head of the association of Central American mayors. 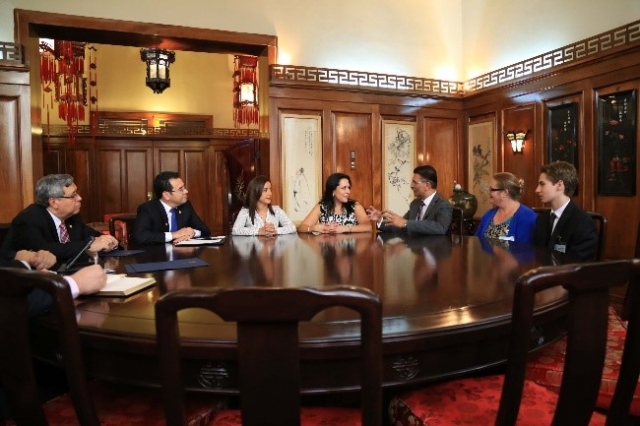 So that’s how Evelyn Paiz, our local representative on the Open Wide board, as well as Foundation Director Charity Crawford, Escobar, and I found ourselves earlier this month sitting at a table with the new president of Guatemala. We had met first with the first lady’s staff, reviewing the progress of the proposals we had made – many of which were well underway. And then we sat down with Guatemala's President Morales and Vice President Jafeth Cabrera, M.D. It was during that meeting that I realized just how far Open Wide had come.

Escobar explained how the success of the Open Wide model – local governments working with local professionals working with and being trained by outside volunteer professionals, with support from industry leaders – had paved the way for more programs. Using that as a template to guide efforts in other areas is making a real difference for the people of Guatemala. And that wasn’t just empty talk: In all of last year, there were perhaps four or five organizations like Open Wide. Under the new administration’s direction, there were more than 20 new such enterprises. Clearly, the Open Wide formula is a winner.

This is a great lesson in spotting – and seizing – opportunities. It’s just like the disguised opportunities that walk through your practice every day: The patient who only wants what insurance covers. The one who says, “I can’t afford it.” Are these really barriers to great dental care? Or are they opportunities to educate? (After all, even a dollar is too expensive if it’s something that is not valued.)

Make it your mission to take advantage of every opportunity.

Open Wide Foundation: Add It to Your Bucket List

This Is the Face of Success in Dentistry

Patient Trust and Value for Dentistry