How a Cone Beam CT Saved a Dental Patient's Life 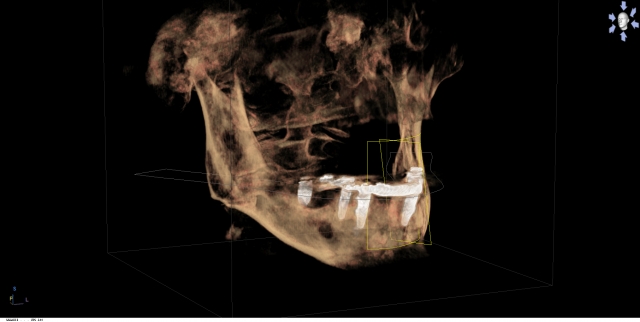 We routinely use panoramic films and cone beam CTs as part of our diagnostic and treatment planning processes. While it is easy to pay attention to teeth and bone, prescribing one of these films means we are also responsible for informing our patients of other relevant findings that may be discovered on these images.

The screen capture from the 3-D CBCT below is a patient I saw recently for an evaluation of chronic pain around the implants in the left side of his mouth. The scan showed the large radiopacity under the right border of the mandible. The patient is a two-pack-a-day smoker, slightly overweight and doesn’t exercise. When the oral maxillofacial radiologist saw the film, he confirmed that the lesion is consistent with a carotid artery calcification and the patient was immediately referred to his physician for the appropriate workup.

One of the common findings on both types of images are carotid artery calcifications. They can be very subtle as in the panoramic film shown in Figure 1, or they can be large and obvious like the CBCT shown in the main image. These areas represent deposits of arterial plaque and are considered to be atheromas. The most common cause of strokes is an embolism that has broken off at the bifurcation of the common carotid artery, or from the proximal portion of the internal carotid, and then flows to and occludes the middle branch of the cerebral artery.1

Friedman first reported the incidental finding of carotid artery calcifications on panoramic films in 1981.2 Etis and Sisman3 reported in 2011 that when compared to the color doppler ultrasound examinations, the standard examination when a calcific lesion is suspected, that the presence of the lesion on a panoramic film was 80 percent accurate. Carotid artery calicifcations are significantly correlated to the presence of hypertension, hyperlipidemia and heart disease.

Watching for these lesions and then making patients aware of them may be a life-saving event. Immediate referral to the patient's physician should be made and copies of the images should be forwarded along with a request for a screening exam. If confirmed by other testing, carotid artery calcifications may be treated with medication, lifestyle changes, surgery or stenting. The dentist may be the first person to make the diagnosis.

By John Carson 6 years ago
Beyond Restoration

By Kevin Kwiecien 6 years ago