Ankylosis Part I: Etiology and Considerations

The ankylosis of a tooth is defined as an anatomical fusion of alveolar bone with cementum and can occur any time during eruption, either before or after the tooth erupts into the oral cavity. Essentially, the periodontal ligament is obliterated by a 'bony bridge' and the root becomes fused to the alveolar bone.

An ankylosed tooth can be diagnosed multiple ways: 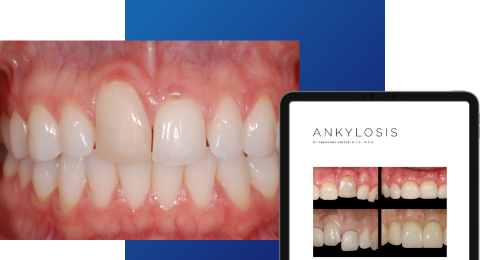 So what is the concern with ankylosed teeth?

The first concern is that the ankylosed root is continually resorbed and replaced with bone, thereby diminishing the support of the crown of the tooth – although the rate of the resorption may be extremely variable.

The second is the impact on normal alveolar development if an ankylosed tooth is present while the patient is undergoing growth. The ankylosed tooth will appear as if it is becoming submerged as the adjacent teeth erupt.

Several theories have been proposed on the different etiologies that may cause ankylosis:

Deciduous teeth become ankylosed far more frequently than do permanent teeth, the ratio being greater than 10-to-1, and lower teeth are ankylosed more than twice as often as upper teeth.

In the subsequent posts, I will look deeper into the different treatment recommendations and options given the variety of clinical findings that may be present.

By Greggory Kinzer 5 years ago
Esthetics

By Greggory Kinzer 6 years ago