Can You Light Cure Too Much? 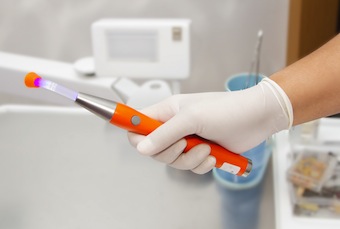 Light cure composite materials have produced a radical shift in dentistry over the past 40 years; it's a shift I have lived in while graduating in 1980. One of the constants I believed in, like the speed of light, was that it was not possible to provide too much light to a light cured material. As it turns out, I might have been wrong.

In researching composite curing I came across a 2006 study that looked at the thickness of the oxygen inhibited layer with varying amounts of light applied to the adhesive layer resin (the bonding resin) under direct fill composites.

In this study, curing the adhesive resin layer longer than recommended by the manufacturer actually resulted in a higher degree of conversion and a thinner oxygen inhibited layer.

Costin
April 9th, 2014
So true Gary! We did a tiny study in our practice together with Prof. Bluck from Charité University in Berlin and it clearly showed the difference between insufficient curing time and extended curing time. Just as a precaution though, for curing times over 5 seconds (pretty much all of them) we cooled the lamp's tip with aer. Even with LED lights, the superficial temperature of the composite is increasing considerably. Also, when the composite surface is contaminated with a small traces of blood, the temperature build-up rate is increasing exponentially.

Gerald Benjamin
April 10th, 2014
Of all the things in dentistry to worry about, over curing resin is not one of them. Dentists are notorious for not spending an adequate amount of time curing resin. In addition, dentists are notoriously cheap and are buy lights from China that are not consistent in their light output. I have been placing direct posterior resins for almost a quarter of a century using bilateral, transenamel illumination with two powerful lights simultaneously. You can't over cure the resin and you will not overheat the pulp. One tooth a YEAR requires endo in the year that place a posterior resin.
Read Article

Surface Disinfection & Operatory Turnover – What Do We Know Now?

Shedding Light on the Dark Side of Dentistry—a Conversation with Dr. Kyle Stanley

By Karen Hewell 1 year ago