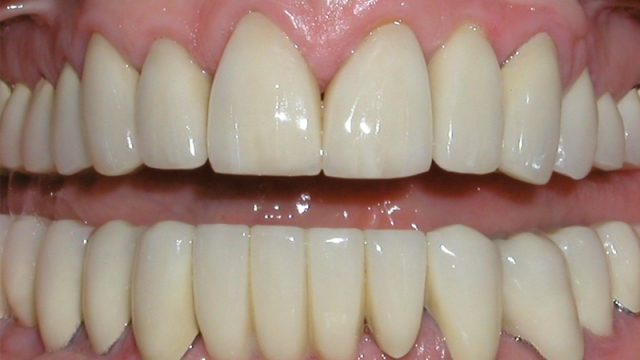 This is my very first restorative procedure on an implant in the anterior esthetic zone, completed in 1996; it is a PFM on tooth #10. This is a case that was referred to me by a colleague after the crowns he had placed started breaking.
My periodontist and I were pretty happy with the result at the time. At that point in my career, success meant that I cemented the restoration and the patient said he was happy. I didn’t notice that the papillae levels were much different on the left than on the right, the gingival levels were different and the porcelain looked like…well porcelain, not teeth. (Fig. 1)

Now, this case was a long-term success because I moved to a different state and I no longer know where he is – which is both good and bad. If you look at the panorex, taken immediately post-op, you can see the abutment I made for the implant as well as the implant position. (Fig. 2)

The good is that I didn’t get to see this case crash and burn – at least the lateral incisor. The other good part is that I really understood function well at that point in my career and I set the occlusion up for long-term success.

The bad of course, is that we didn’t know what we didn’t know. This case was done on an external hex implant that was placed where the bone was, after a traumatic extraction that lost the buccal plate, with an abutment that was cast gold and 7mm tall from implant platform to crest of tissue. That was partly the state of what was available and partly some unknowledgeable judgment on my part.

The other bad news is that it appears there is cement on the distal of the abutment, about 4mm subgingival. So I will give myself some forgiveness here since I absolutely did my very best to the limit of my abilities at that point in time. What would I do differently today? Let’s start with looking at what we know and what we see.  (Fig. 3, Fig. 4)

There is an obvious midline cant of the anteriors, especially the left central; there has been attachment loss that was treated by carrying the preps to the gingival margin; there are fractured restorations and multiple endos and #10 fractured at the level of the gingiva shortly after the photos were taken.

So we have teeth that are too long because attachment loss was treated by full coverage; we have a tooth without adequate ferrule (#10) to be restored and we have multiple endodontically treated teeth. These crowns were done with Empress and simply couldn’t withstand the occlusal forces of the patient and they were placed with inadequate overjet, so there was a pathway issue. Additionally, they were over prepped and five of the six anteriors ended up with endodontic treatment.

There are lots of other issues to discuss here but let’s focus on just the anteriors. How might I handle this case?

First, I’d like to think about where I would visualize the teeth and gingival levels. Fig. 5 shows a drawing of what the teeth might look like if restored more esthetically. It requires accepting the midline being off and making shorter teeth.

What are the choices to change tooth position, shorten the teeth and change the cant?

What about #10 – that has no ferrule and is non-restorable as it is? Today, I would ask my orthodontist to either extrude the tooth to create ferrule or, if the tooth were still not restorable, the extrusion could continue to build a bony bed for an implant.

The teeth that have been endodontically treated were built up with fiber posts that I believed were state-of-the-art at the time. Today, we understand that posts work best when they are rigid. Their purpose after all, is to support the core buildup, and the movement of the fiber posts creates flex and ultimately failure.

Finally, if the implant were placed today, the platform would be placed at about the level of the facial bone of the adjacent teeth and with the center of the platform so that it exits through the incisal edge of the proposed restoration. (Fig. 6)1

I would still build this occlusion in a similar fashion, with a very shallow anterior guidance and minimal overbite and a more level occlusal plane. While I have concerns that most of the anterior restorations may have failed by now, if they haven’t, it is because the occlusal forces were managed well.

Dentistry is never static, however, the principles of diagnosis and treatment planning are timeless. What changes is not the principle but the understanding of what we see and how we might treat it. If I were to do this case again today, even though I think I know how to make it successful long-term, I would still ask colleagues what they think about my treatment plan. Enlisting the help of others who are knowledgeable often results in better treatment plans. My lesson here: Never believe that you have the best answer when you come up with it all by yourself!

A Case for Taking a Restorative Design Course

By Mark Fleming 8 years ago