Saving for the Future: Part I 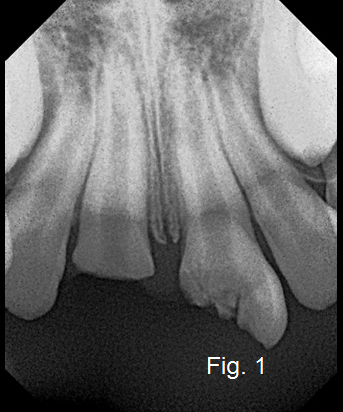 This 8-year-old patient presented to my office in late October of 2005, having fallen from her bicycle earlier in the day. In addition to the small lacerations and contusions, #8 and #9 had sustained fractures that made their restorative prognosis hopeless (Fig. 1).

Extracting these teeth on an 8-year-old would leave an alveolar ridge defect of significant magnitude. This would make future tooth replacement problematic whether we used implants or a conventional fixed partial denture. I recommended banking the remaining roots to preserve the alveolar ridge (Fig. 2). 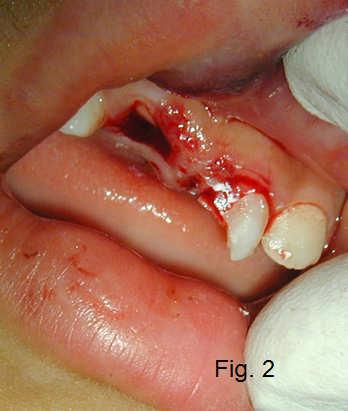 The teeth were isolated, which required packing cord, clamping gingival tissue and removing coronal pulp from the root. White mineral trioxide aggregate (ProRoot MTA) was placed over the remaining pulp tissue. At the time of treatment, it was reported that the MTA would not set without a source of moisture, so it was covered with a moist cotton pellet and then sealed in place with bonded Corepaste.

The patient returned mid-November of 2005; the Corepaste and the cotton pellet were removed and the set MTA sealed only with bonded Corepaste. A surgical flap was subsequently reflected, the remaining tooth structure beveled even with the alveolar ridge and the flap sutured closed. 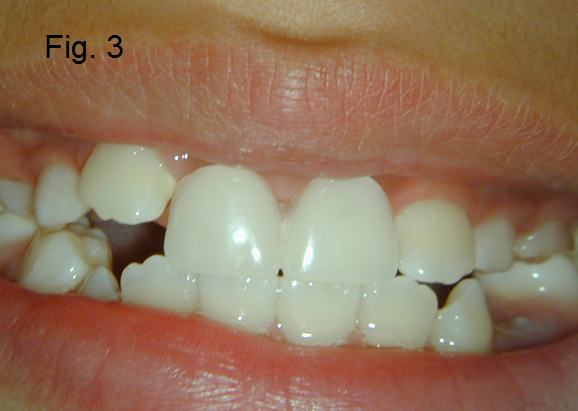 The patient was sent back to the referring pedodontist and an acrylic removable partial denture was fabricated (Fig. 3). The patient was followed and the site healed without incident. No sign of apical periodontitis had become evident and the remaining pulp tissue reacted as expected, continuing to produce dentin resulting in pulp canal obliteration.

In my next article, I will go over her five year follow up, as well as her nine year.

Arnold J &amp; Joyce M Malerman, DDS
June 12th, 2014
Thinking outside the box, there's indication of crowding in both arches based on just what could be visualized in your x-rays and photographs. I commend your proactive approach to her treatment. If she had arch length insufficiency, however, sufficient to require premolar extractions, perhaps removing lower premolars and upper centrals just prior to Orthodontic treatment, would be a consideration. The lateral could then substitute for the centrals, with appropriate esthetic management, and the canines could substitute for the laterals.

Fiona Neill
June 19th, 2014
Why did you care about pulp canal obliteration? Couldn't you Just attempt a root canal since the roots would be extracted at a point anyway?

Glen Doyon
June 19th, 2014
I'm just looking at the Spear Digest for the first time. You are only seeing the first third. You'll see the next third for the next Digest, I guess. You'll see the final third in about a year......:-)) I don't care about pulp canal obliteration. I'm actually happy about it. I think having the teeth remain "vital" for as long as possible (i.e. not doing a "complete" endodontic procedure) is safer, more predictable. When it comes time for removal, these teeth will be easier for me to extract.

Fiona Neill
June 20th, 2014
Thank you. I read the 2/3 and I'm curious about the 3/3. Would you give her a Maryland bridge for now for a more esthetic reason?

Glen Doyon
June 20th, 2014
You're actually only seeing the first third. Second third coming with my next Digest. Last third, I'm guessing, a year from now (hint). She successfully wore an RPD through her transitional dentition and ortho. She has no problem with the RPD now. She's a Black Belt in karate, so I guess she doesn't have to worry about getting her two front teeth knocked out..-)). I would not prefer to put her in a resin bonded bridge. In my experience, they work well for a single tooth replacement and when only one wing is bonded in place. I don't think we could cantilever off the laterals and I wouldn't want to bond to both laterals. I could be arm twisted into recommending this if the patient wasn't as successful as she is with the RPD.

Michael Westman, DDS, MS
September 25th, 2014
Malerman's: HOLY COW, you must have been joking while suggesting considering extractions...with the tongue crowding, upper airway obstruction, and TMD that would contribute to, not to mention the awful cosmetic result... when it would be so easy to gain arch space with proper orthodontics.
Read Article