In the previous article in this series I showed the non-vital bleaching of a discolored lateral incisor. In this article I’ll discuss discolored endodontically treated teeth that have existing indirect restorations.

This patient presented to me unhappy with the esthetic outcome of the veneers on her central incisors. She disliked the greyness she perceived in the cervical half of each central, as well as the visible margins. The problem was compounded by the fact that they were only six months old. (Figure 1)

The second photo is from the appointment when I removed the veneers, cleaned up the prep and lowered the finish line below tissue .5 - .7 mm. There is significant discoloration on both teeth, but it is limited to the cervical few millimeters. (Figure 2) 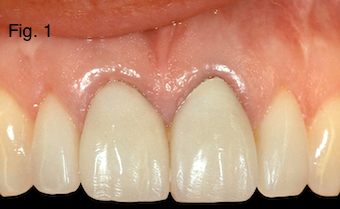 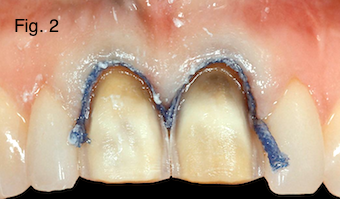 I tried multiple brands of opaque try-in pastes to see if I could use the first set of veneers but none of them produced an acceptable result. In my experience the final cement may not produce the same result the try-in paste did. Ultimately I had these veneers remade by the lab three times before they were acceptable. (Figure 4) This could have been avoided had I simply used composite to mask the dark areas before the final prep and impression. 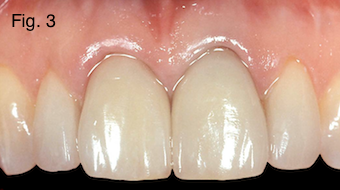 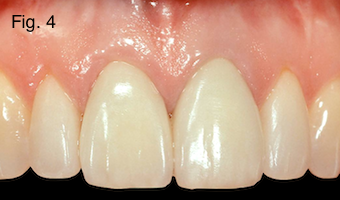 I get the question all the time if crowns would have been a better choice in a case like this rather than veneers. Certainly a crown with an opaque core could have masked the discoloration easily. However, when the teeth are intact except for the composite in the access cavity and the discoloration is localized, I always prefer to mask the discolored area and maintain more natural tooth structure with a veneer.

(If you enjoyed this article, click here for more by Dr. Frank Spear.)

Tom
February 28th, 2014
Would you ever recommend doing internal bleaching before restoring in a case like this?

Gerald Benjamin
March 1st, 2014
In the majority of teeth with significant discoloration, there is an endodontic failure that is not evident on a radiograph but is obvious on a scan. I believe that the most predictable way to treat this is to redo the endo and internally bleach. Trying to prep into the stain and then add composite significantly weakens the tooth. Scans will reveal that a significant percentage of endodontically treated teeth have less than ideal outcomes due to single appointment protocols.

Frank Spear
March 1st, 2014
I am a fan of internal bleaching in some instances, but not all. Case 1 in this series was one example of when I think it is beneficial. In the SPEAR TALK forum this topic has been discussed a number of times recently, and I have posted literature there that brings up the biggest issue with internal bleaching, relapse of the discoloration. The literature reports 5 year relapse rates as high as 50%. The risk if you do internal bleaching, then use a more translucent restoration, is if the tooth discolors, so does the restoration. Having said that, when the tooth structure is thin, due to a very large access used during the endo, which makes any additional tooth reduction at risk of potentially affecting the structural integrity of the tooth, internal bleaching makes sense and is a risk I will take. When the amount of tooth structure is adequate, as I believe it is in this case, it only requires an addition .2 to.3mm of reduction to opaque out the discolored areas with products like Kerr Kolor Plus opaquer. Root resorption can also be a risk, but is minimal if a seal is placed in the canal at the level of the gingival attachment. I don't know if there is any literature support for Gerald's comment about discolored teeth and failing endo, but both of these teeth were retreated endodontically prior to my restorations. If you notice the title of this article is labeled Case 2, I have written up 7 cases in this series, including an example where I used internal bleaching as a way to not structurally weaken the tooth anymore, so stay tuned for that, it is Case 7 in the series. Frank

Bruce Lamond
March 1st, 2014
I prefer to prep crowns and be done with it, I feel it's more predictable. I had this exact case present last month and the patient was so upset with the previous dentists attempts to internally bleach and place new veneer restorations. I retreated #8, placed GI over the resilon, and placed Lava crowns over #8 &amp; #9. I have the exact same restorations on #8 &amp; #9 with Endo on #8. Did for my patient what I had done for myself. Bottom line do what you know works and what's best for your patients whatever that is. I want to stress that this is my opinion, stress opinion.

Gerald Benjamin
March 2nd, 2014
The solution to darkly colored anterior teeth must take into consideration the age of the patient. In a 60 year old patient with a reasonable overbite/overjet and relatively intact mandibular anterior teeth…no problem in placing crowns. You can reasonably predict that the teeth and crowns will go the life distance. Placing crowns in a 25-30 year old patient means that you have just performed pre-implant treatment planning. The only thing that is predictable is that the maxillary anterior teeth will be lost at a relatively young age. The only thing that destroys more tooth structure than caries are dentists. Dentists have never seen a tooth that they don't want to crown.

Walter Collazo
April 23rd, 2014
Recently went through the same frustration and challenge in a case where a female patient had endodontically discolored central incisors and normal color lateral incisors prepped for veneers. I opted to prepared the centrals deeper and not use opaque dentist composite the first (2) attempts. The outcome was less than desirable and matching the adjacent lateral incisors was a greater challenge. Any word of wisdom about the sequencing of preparation and delivering the units to maximize the match and manage the substructure discrepancy impact on the shade of the restorations.

Manjitsingh Bhalla
October 14th, 2014
Suffering from an aesthetic cause out of the veneers on incisors is certainly not what we expect. Sorts of dull marks being highly visible on teeth, is an ever embarrassing feel one may have. Accurately practiced restoration (probably with an image made by the technician, so perfectly) will likely bring good result. Whether crowns or veneers; consulting your dentist (endodontist) will more certainly show what exactly will go there to achieve favorable output, yes truly!
Read Article

By Greggory Kinzer 9 years ago

Can Teeth Be Prepped and Restored Without Endodontics?