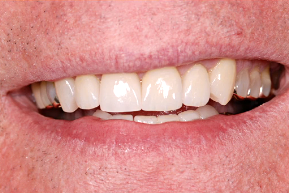 In this series of articles, I'm going to start on a new case study for a retired dentist named Tom. His desire was to replace a posterior reconstruction that had been very well done about 25 years ago, along with replacing anterior restorations that were done more recently.

From a structural and biologic perspective, he has some missing lower posterior teeth that are replaced with FPDs currently. The decision needs to be made as to whether we will redo the FPDs that have done well for 25 years, or use implants. In these instances it often comes down to evaluating the bone available for implants and whether it can be augmented, and also waiting to evaluate the quality of the abutments after the FPDs are removed.

The starting point of treatment was to send the information to the lab to for a diagnostic wax-up. I do this by drawing the proposed treatment plan on photographs, indicating any changes in incisal edge position, midline, occlusal plane and gingival levels. The lab can then wax the maxillary arch following the drawing and correct the mandibular tooth position to correct the occlusion.

Once the wax-ups were done, the laboratory was able to fabricate shell provisional restorations.

When prepping the maxillary arch, I find it easier for the patient and myself to segment the anesthesia and preparation process. Instead of anesthetizing all the teeth in the arch, and trying to prep them all at once, I prefer to do the anesthesia and preps in smaller segments. My preference is to do the maxillary posteriors on one side first, then the maxillary posteriors on the other side next, and finally to anesthetize the anterior teeth and complete the preparation of the arch. My experience is that this results in using far less anesthetic, and far fewer injections compared to doing everything at once.

Doing Each Step at the Highest Level

Even though Tom is ultimately having both arches redone, I only do the maxillary arch on day one. This allows me to really focus on doing each step at the highest level I can, as opposed to trying to prep both arches in the same day, which is something I have done before, but don't find very enjoyable. The time frame between the maxillary arch prep and mandibular arch prep is really dependent on several factors, such as if you are changing the lower occlusal plane and tooth position or not. If you aren't you could actually complete the maxillary arch restoration start to finish prior to starting the mandibular arch. If you are altering the mandibular arch significantly you will ideally want to prep both arches so the lab can idealize the occlusion in the final restoration.

Having said that, most dentists are fearful of leaving the patient with a less than ideal occlusion for very long between when the maxillary provisional is placed against the unaltered mandibular arch. It is helpful to realize that orthodontics routinely creates occlusions that don't fit well for months or even more then a year during the orthodontic treatment, and patients adapt quite well. Having said that I usually schedule the mandibular prep within a few weeks, in Tom's case since, he traveled from out of state; I did the mandibular arch the next day. In Part II, I'll discuss margin placement.