Study: Does Oral Bacteria Create a 'Fingerprint' in Your Mouth?

Study: Does Oral Bacteria Create a 'Fingerprint' in Your Mouth? 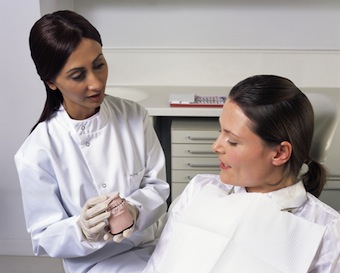 According to a recent news release, the bacteria in the human mouth – particularly those nestled under the gums – are as powerful as a fingerprint at identifying a person's ethnicity.

Scientists identified a total of almost 400 different species of microbes in the mouths of 100 study participants belonging to four ethnic affiliations: non-Hispanic blacks, whites, Chinese and Latinos. Only two percent of bacterial species were present in all individuals – but in different concentrations according to ethnicity – and 8 percent were detected in 90 percent of the participants. Beyond that, researchers found that each ethnic group in the study was represented by a "signature" of shared microbial communities.

"This is the first time it has been shown that ethnicity is a huge component in determining what you carry in your mouth. We know that our food and oral hygiene habits determine what bacteria can survive and thrive in our mouths, which is why your dentist stresses brushing and flossing. Can your genetic makeup play a similar role? The answer seems to be yes, it can," said Purnima Kumar, associate professor of periodontology at The Ohio State University and senior author of the study.

"No two people were exactly alike. That's truly a fingerprint."

As the release states, Kumar used a DNA deep sequencing methodology to obtain an unprecedented in-depth view of these microbial communities in their natural setting.

When the scientists trained a machine to classify each assortment of microbes from under the gums according to ethnicity, a given bacterial community predicted an individual's ethnicity with 62 percent accuracy. The classifier identified African Americans according to their microbial signature correctly 100 percent of the time.

The research also confirms that one type of dental treatment is not appropriate for all, and could contribute to a more personalized approach to care of the mouth. "The most important point of this paper is discovering that ethnicity-specific oral microbial communities may predispose individuals to future disease," Kumar said. Though it's too soon to change dental practice based on this work, she said the findings show that "there is huge potential to develop chair-side tools to determine a patient's susceptibility to disease."

The research is published in the Oct 23, 2013, issue of the journal PLOS ONE.

Do What You Can, With What You’ve Got, Where You Are

By Imtiaz Manji 6 months ago