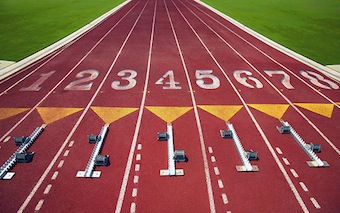 According to a recent press release from University College London, many of the elite sportsmen and women who competed at the London 2012 Olympic Games had poor levels of oral health similar to those experienced by the most disadvantaged populations. Among the athletes surveyed 18 percent said their oral health was having a negative impact on their performance.

The research, which was led by Professor Ian Needleman at the UCL Eastman Dental Institute, is published in the British Journal of Sports Medicine.

The researchers recruited 302 athletes to take part in the study at the Dental Clinic in the London 2012 athletes' village. The athletes represented 25 different sports, with 95 (34.9 percent) competing in track and field, 38 (14 percent) boxing and 31 (11.4 percent) playing hockey. The athletes were given a systematic oral health check-up before being asked to give a personal assessment of the impact of oral health on their quality of life and athletic training/performance.

As the release states, the research team found high levels of poor oral health with 55 percent of athletes suffering from dental caries (tooth decay), of which 41 percent was into the dentine (and therefore irreversible). More than three quarters of the participants had gingivitis (early stage gum disease) with 15 percent showing signs of periodontitis, an irreversible gum infection in the soft tissue around the teeth.

Among the athletes taking part in the study, 42 percent said that they were "bothered by oral health" issues, with 28 percent saying that it affected their quality of life. Almost one in five (18 percent) athletes said that they believed poor oral health was negatively affecting their training or performance levels.

Nearly half of participants (46.5 per cent) had not attended for a dental examination or hygiene care in the previous year, while 8.7 per cent said they had never been to the dentist.

Professor Ian Needleman, lead author of the paper at the UCL Eastman Dental Institute, said: "Oral health is important for wellbeing and successful elite sporting performance. It is amazing that many professional athletes – people who dedicate a huge amount of time and energy to honing their physical abilities – do not have sufficient support for their oral health needs, even though this negatively impacts on their training and performance.

"Oral health assessment should be part of every athlete's routine medical care," continues Professor Needleman. "If we are going to help them optimize their level of performance we need to concentrate on oral health promotion and disease prevention strategies to facilitate the health and wellbeing of all our elite athletes."

In the report the authors speculate that the associations between oral health, wellbeing and performance might be explained by oral disease causing pain, systemic inflammation and a reduction in self-confidence and quality of life.

Previous studies have repeatedly found athletes to have poor oral health, something, which might result from frequent carbohydrate intake, a reduced immune function through intensive training and a lack of awareness about the links between oral health and elite performance.

By Robert Winter 2 years ago
Unknown

A Paradigm Shift in Understanding Risk for Cancer in Dentistry

Occlusion and Muscles at Intercuspal Position