Study: Are Nanodiamonds the Future of Dental Implants?

Study: Are Nanodiamonds the Future of Dental Implants? 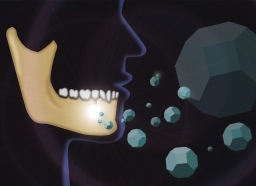 According to a recent press release UCLA researchers have discovered that diamonds on a smaller scale than those used in jewelry could be used to promote bone growth and the durability of dental implants.

Nanodiamonds, which are created as byproducts of conventional mining and refining operations, are approximately four to five nanometers in diameter and are shaped like tiny soccer balls.

Scientists from the UCLA School of Dentistry, the UCLA Department of Bioengineering and Northwestern University, along with collaborators at the NanoCarbon Research Institute in Japan, may have found a way to use them to improve bone growth and combat osteonecrosis, a potentially debilitating disease in which bones break down due to reduced blood flow.

As the release states, implant failures require additional procedures, which can be painful and expensive, and can jeopardize the function the patient had gained with an implant. These challenges are exacerbated when the disease occurs in the mouth, where there is a limited supply of local bone that can be used to secure the prosthetic tooth, a key consideration for both functional and aesthetic reasons.

The study, led by Dr. Dean Ho, professor of oral biology and medicine and co-director of the Jane and Jerry Weintraub Center for Reconstructive Biotechnology at the UCLA School of Dentistry, appears online in the peer-reviewed Journal of Dental Research.

During bone repair operations, which are typically costly and time-consuming, doctors insert a sponge through invasive surgery to locally administer proteins that promote bone growth, such as bone morphogenic protein.

Ho's team discovered that using nanodiamonds to deliver these proteins has the potential to be more effective than the conventional approaches. The study found that nanodiamonds, which are invisible to the human eye, bind rapidly to both bone morphogenetic protein and fibroblast growth factor, demonstrating that the proteins can be simultaneously delivered using one vehicle. The unique surface of the diamonds allows the proteins to be delivered more slowly, which may allow the affected area to be treated for a longer period of time. Furthermore, the nanodiamonds can be administered non-invasively, such as by an injection or an oral rinse.

"We've conducted several comprehensive studies, in both cells and animal models, looking at the safety of the nanodiamond particles," said Laura Moore, the first author of the study and an M.D.-Ph.D. student at Northwestern University under the mentorship of Dr. Ho. "Initial studies indicate that they are well tolerated, which further increases their potential in dental and bone repair applications."

"Nanodiamonds are versatile platforms," said Ho, who is also professor of bioengineering and a member of the Jonsson Comprehensive Cancer Center and the California NanoSystems Institute. "Because they are useful for delivering such a broad range of therapies, nanodiamonds have the potential to impact several other facets of oral, maxillofacial and orthopedic surgery, as well as regenerative medicine."

Other authors of the study were Professor Eiji Osawa of the NanoCarbon Research Institute in Japan; and Ho-Joong Kim, a postdoctoral research scholar who was previously in Dr. Ho's laboratory and is currently an assistant professor of chemistry at Chosun University in South Korea.

The study was supported by the National Cancer Institute, the National Science Foundation, the Wallace H. Coulter Foundation, The V Foundation for Cancer Research, the Society for Laboratory Automation and Screening, Beckman Coulter and the European Commission.