By Darin Dichter on May 9, 2014 | 0 comments Print
Share
tweet
share
The SAM 3 is my go-to articulator system due to its reliability in calibration, clean design and the ability to tailor the scope of programming. Part of the beauty of the SAM design lies in the ease with which the transfer fork assembly can be tightened with only a single toggle. Facebow, or more accurately earbow, records are used to transfer the spatial relationship of the maxillary cast and an arbitrary hinge axis to an articulator.

Making the SAM facebow record and attaching the maxillary cast to the articulator are actually quite simple and with a bit of training many auxiliaries can quickly become competent in the technique. An additional benefit to this training is having a second set of eyes to evaluate the proper orientation of the facebow.

The SAM Axioquick facebow (Fig. 1a) has a caliper-like bow, a contoured nasion piece and a transfer fork assembly, which consists of a universal joint and a transfer fork. Once the facebow record is made clinically, the transfer fork assembly is removed from the bow and attached to the SAM 3 transfer stand (Fig. 1b, 1c) in the lab. The maxillary cast is positioned on the fork and then attached to the articulator with a removable mounting plate and low-expansion mounting stone. 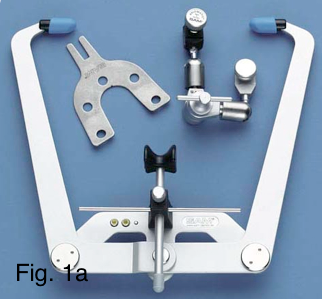 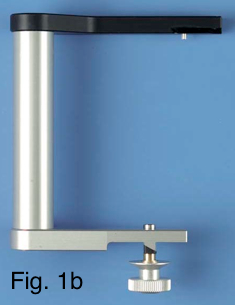 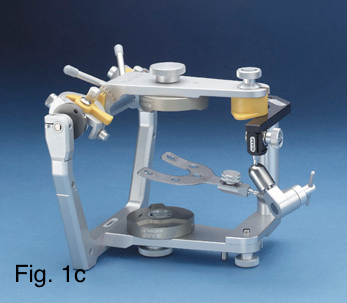 The technique is simple. Here's what you need to do:

Assemble and attach the Universal Transfer Stand to your chosen articulator (Fig. 2a, 2b). Some temporary disassembly of the alternate articulator may be necessary. On my Panadent I had to remove the incisal pin (Fig. 2c). 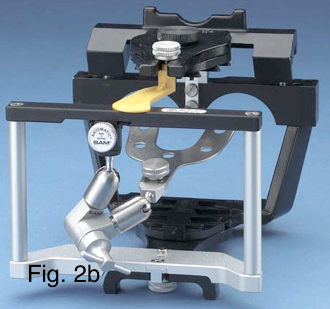 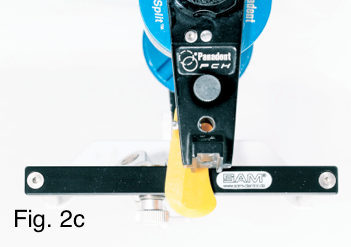 Make the facebow record in the usual way. For a refresher, view the course, Understanding SAM 3 Articulators and Facebows, in the Assisting section of the Digital Suite course library. If you're not yet a member of Digital Suite, you can become a Basic member for free.

Finally, remove the transfer assembly from the bow and attach it to the Universal Transfer Stand (Fig. 3a, 3b, 3c). 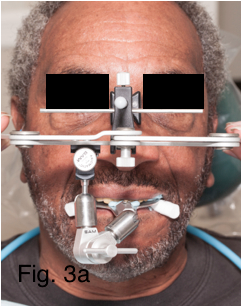 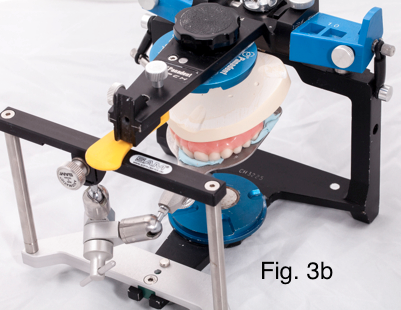 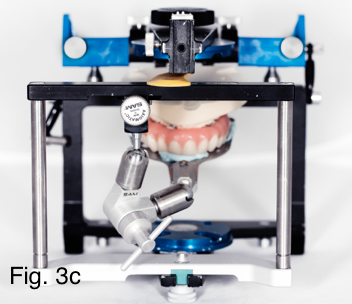 Using the SAM facebow is really very easy and use of the Universal Transfer Stand means that even offices working with a variety of articulators can now simplify their approach to making facebow records. Additionally, delegating this task to a trained team member is now dramatically simplified. One facebow system, multiple articulators.

Regardless of who is actually making the facebow record it is important to remember two key things.

1. It's still important to level the facebow with a horizontal reference.

Have you tried it? I'd love to hear your thoughts in the comments below.

Treating the Patient with Disc Displacement