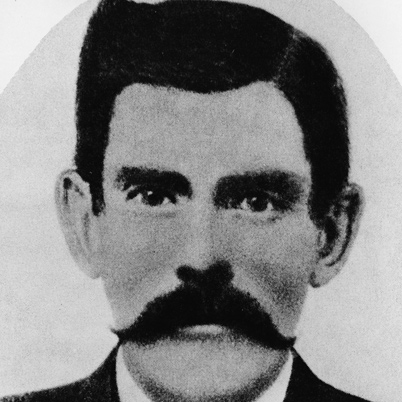 Tomorrow marks the 132nd Anniversary of the Shootout at the OK Corral, a legendary gunfight that involved a dentist – Doc Holliday. You may be familiar with the sharp-shooter with a penchant for gambling and downing whiskey, but his dental career is rarely discussed when we think of the American West icon.

John Henry "Doc" Holliday was born in 1851 to Henry Burroughs Holliday, a druggist and officer in the Confederate Army, and Alice Jane Holliday in Griffin, Ga. He was born with a cleft palate and partial cleft lip but was operated on by his uncle to fix the defect soon after birth. He was raised in a middle class household and his parents instilled in him the value of proper education from a very young age. Young Holliday was considered very intelligent and excelled in his studies.

In 1872 at the age of 20, Holliday received his Doctor of Dental Surgery from the Pennsylvania College of Dental Surgery in Philadelphia. At the time, the school required him to attend lectures and classes for five months followed by an eight month apprenticeship with a dentist in Georgia. As an apprentice, he did fillings and extracted teeth.

After graduation, Holliday moved to Atlanta and started his dental career as an associate to a successful local dentist. Unfortunately eight months later, Holliday was diagnosed with pulmonary tuberculosis, the same disease that took his mother's life when he was just 15.

To help stabilize his condition, he moved to the drier climate of Dallas under his doctor's orders. He opened a dental practice there along with Dr. John Seegar. These two dentists were considered some of the most highly skilled dentists of their time. In fact, when they entered the categories of Best of Gold Teeth, Best Vulcanized Rubber and Best Set of False Teeth and Dental Ware at the Dallas County Fair, they took home the gold prize in all three categories.

Forced to step away from dentistry due to the Great Recession, Holliday spent the next few years gambling and in-and-out of recovery due to his declining health and multiple altercations with gambling competitors. Holliday relocated to Breckinridge, Texas in 1877 where he was introduced to Wyatt Earp and Holliday's future common law wife, "Big Nose Kate," more formally known as Mary Katharine Horony.

Not long after his relocation Holliday felt his life was so threatened after stabbing a gambling vigilante that pulled on a gun on him during in a card game, that Kate doctored an escape plan to Dodge City, Kan. A city with only three doctors and no dentists, Holliday was able to set up another dental practice.

Within a year, Holliday's health was declining rapidly and sought treatment in Las Vegas, New Mexico with Kate by his side. Since old habits die hard, Holliday was arrested for operating a gaming table within months and was forced to pay a sizeable fine. It was at this time that Earp suggested the couple move to the new boomtown of Tombstone. Just like in Dodge City, Holliday would be the only dentist in town and could set up another practice.

After the trial, Holliday moved to Leadville, Colo., where he shot another gambling competitor and was tried for the altercation. Suffering from pneumonia and weighing in at 120 pounds at the time of the trial, Holliday was found not guilty since the jury believed the frail man could not protect himself from the gambler in any other way.

By 1887 Holliday's health was at an all-time low. At a desperate attempt to improve his health, Holliday ventured to Glenwood Springs, Colo., for the therapeutic healing powers of the water. Unfortunately it's speculated that the sulfurous fumes actually did more harm than good to the ailing man and only sped up the process of his deterioration. Holliday died at the age of 36 on November 8, 1887 only minutes after requesting his last shot of whiskey and with his boots off.

A Paradigm Shift in Understanding Risk for Cancer in Dentistry

How To Help Patients Value Dentistry: One Dentist's Firsthand Experience

By Carl Steinberg 2 years ago