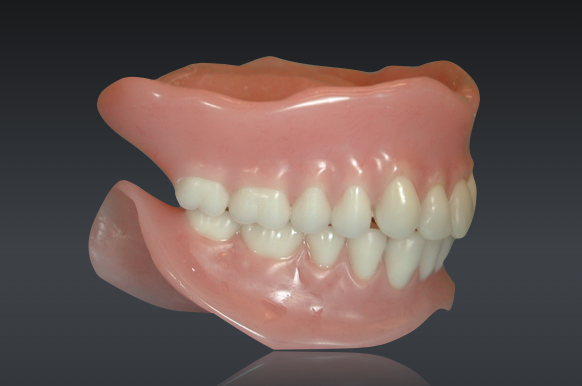 Prior to the introduction of osseointegrated implants to dentistry, conventional complete removable dental prostheses were really the only treatment option available for completely edentulous patients.

(Click this link to read more about complete denture strategy.)

Hilary F.
October 22nd, 2015
can you review the tests for phonetics? I haven't made a full denture in years and I forget how to achieve good phonetics! Kevin H.
October 22nd, 2015
Hilary, Not to hijack, Dr. Dichter's excellent and accurate article, the phonetic tests I use are quite simple. I have the patient count from 50 to 60, which gives me a good idea of where the maxillary teeth touch the lower lip (goal is the wet/dry line) and a good idea of the palatal design with "S" sounds. A whistle on "s" sounds often indicates that the anterior palate is slightly too thick or the palatal vault of the denture is a bit too narrow; if so, the cameo surface of the denture should be adjusted. Sometimes, you can apply pressure indicating paste (PIP) to the cameo surface of the denture during these tests to see where the tongue touches the cameo surfaces during speech and relieve there if problematic. The second test I use is to have the patient say "57 judges went to the church to pray." The "J" and "ch" sounds give you an idea of vertical dimension; if your VDO is too open, the patient will likely click or bang on the posterior teeth during speech. The "P" sound gives a nice idea of lip competence: if the anterior flange is too bulky or overextended, the "p" sounds will be difficult. Hope this helps, Hilary. Darin, please correct me if you disagree. Great article!

Darin D.
October 22nd, 2015
Great answer Kevin! Hilary you are not alone- lots of us have gotten a little rusty with our complete denture technique. Keep an eye out for a future digital course at Spear Online Best- d Daniel B.
December 29th, 2015
Great advice Kevin! What shoul you expect to see or hear on the ch and j sounds if the VDO is less than it should be. I know it may appear as though they are frowning when overclosed. Any tips to look for? Also, on p sounds what if the flange is underextended or better yet not full enough. I guess the retention will suffer if underextended but what if not full enough? I would greatly appreciate your help. -Dan

Eric M.
April 5th, 2016
These steps are exactly as I learned in dental school at the University of WA and the same way I still do it 21 years later. It may seem like a lot of steps to some but it works. Nicely written! Thank you

By Doug Benting 4 years ago
Esthetics

By Doug Benting 7 years ago