A Story of Hall-of-Fame Teamwork 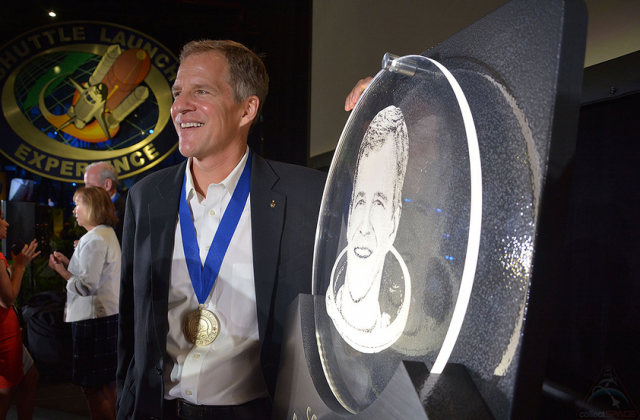 I was at the Kennedy Space Center in Cape Canaveral, Fla., earlier this month for a very special event. Those of you who are regular readers will remember my recent article about my friend, the medical doctor, Mount Everest-climber, motivational speaker, and veteran astronaut Scott Parazynski. Well, this year Scott was being inducted into NASA's Astronaut Hall of Fame, and I had the honor of being invited to attend the ceremony.

If you read that earlier article, you may well have come away with the impression that Scott is the ultimate over-achiever, almost freakish in his single-minded pursuit of literally reaching the highest heights. And it is true that this is a man who knows how to create a vision and how to act on it. But, ironically on this day when he was being singled out for his achievements, what really struck me on that visit to Cape Canaveral was the phenomenal teamwork that goes into creating that kind of success.

To walk among the rockets and spacecraft on display at the Space Center is an awe-inspiring experience, and a humbling one. I admit I arrived for the ceremony feeling as big as ever – after all, I was an invited guest of one of the two astronauts being honored – but it didn’t take long in that environment to be reminded of how small I was, and how our greatest achievements occur not just when we personally excel, but when a number of people are inspired to give their best to a cause. That is the story of the space program, when you think about it – thousands of Americans coming together to do great things in the name of human advancement.

Scott would tell you that himself. For instance, on his most memorable mission, when he ventured out from the space station on a spacewalk to do an urgent and complex repair, he was farther away from the safety of the airlock than any astronaut had gone. That mission has been called his era’s “Apollo 13 moment,” and Scott says that when he was out there he was fully focused on his task, knowing that everybody else on the team – in the space station and back home on Earth – was just as committed to his success as he was.

A good number of those team members – along with other astronauts from years past – were on hand at Scott’s induction, and you could tell that they also took pride in this recognition. You really got the sense that the people who work for the space program are a family, united in their passion for what they do. It is a tremendous example of how our “human capital” remains our greatest strength in this country. When you can align people of shared values in the purpose of attaining a shared vision, great things can happen.

That’s true whether you’re on a complex space mission, or climbing the world’s highest peak, or providing outstanding dental care opportunities. If you are going to reach the greatest heights, you must surround yourself with people – whether mentors, colleagues, or team members – who share your passion and will give you the support you need so you can always focus on giving your most to the moment.

It was an incredible experience to be there to see my friend recognized for his outstanding career achievements. But I came away with an even greater feeling than I expected – a feeling not only of pride for my friend, but of pride in what we, as a people, are capable of. It was a reminder – and I know Scott would agree with this – that true greatness is always a team effort.

A Formula for Living the Life of Your Dreams