(Click the link for “Considerations for Preparation Design and Facial Margin Placement: Part I.”) 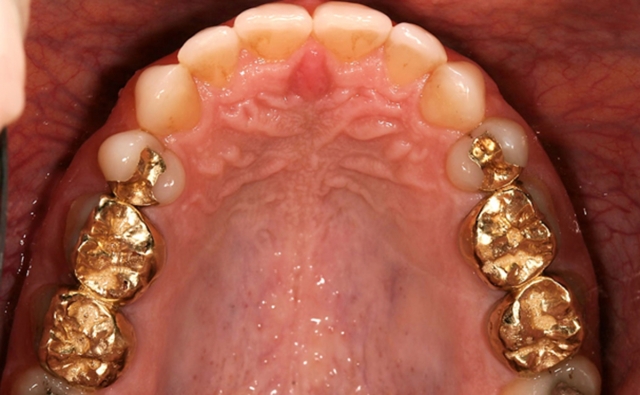 1. The existing tooth color becomes a significant issue as the use of a supragingival margin will mean matching the restorations to the existing tooth shade. If the patient wants the shade lighter, the entire facial surface will need to be covered, which means extending the facial margin apically and using either an equigingival or subgingival margin, typically resulting in a full crown preparation.

2. We must also consider material strength and opacity. The most esthetic supragingival margins will come from relatively translucent materials, bonded with translucent resin cements. Examples of materials with the translucent properties desired would be feldspathic porcelain, (traditional powder and liquid based ceramics), leucite reinforced ceramics, (Empress being the most common example), and lithium disilicate, (monolithic e.max). All have been used successfully, and all are easily etched and bonded, which is a necessity when using translucent resin cements. However, they do have significant strength differences; e.max lithium disilicate, for example, is significantly stronger than the other two. (Figure 2)

Although zirconia can be used for partial coverage onlay type restorations with supragingival margins, its opacity and difficulty in predictably bonding makes it more difficult to get an esthetic result. Having said that, more translucent versions of zirconia are being released on a regular basis.

One final key to the relative visibility of the supragingival margin is material thickness. The thicker the material, the more opaque and visible the margin becomes. So the most invisible supragingival facial margin has a long bevel allowing the material to thin out and gain translucency. On molars, however, strength is always a concern, so I typically do not bevel down the facial surface. Instead, I use a butt joint and follow the manufacturer’s recommended thickness of at least 1.5-2 mm. (Figures 5 and 6)

Considerations for Preparation Design and Facial Margin Placement: Part I

By Frank Spear 6 years ago
Esthetics

The Five Tenets of Esthetics

By Gary DeWood 10 years ago

Gingival Levels in the Esthetic Zone