Are You Afraid to 'Take the Plunge'? 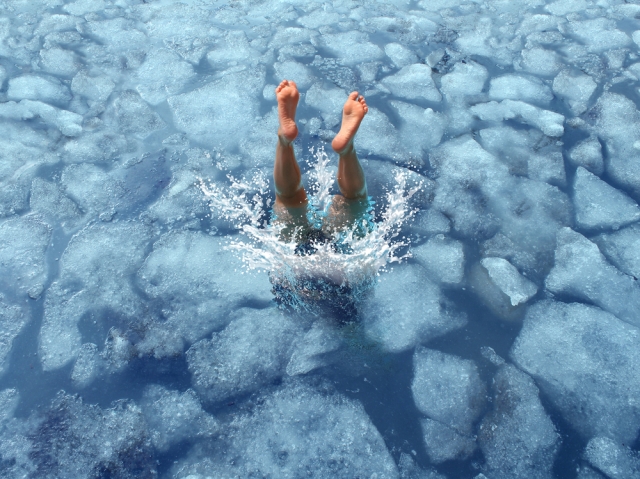 I just got back from an incredible vacation trip. I’ll share more about it later, but for now let me tell you about one story that occurred while we were taking a cruise in the waters of Antarctica.

It was the third day of our voyage. We were dining with my good friend Matt when it was announced that the next day featured a special event. The ship was making a stop then, and one of the opportunities available to passengers was a kayaking excursion through the waters around a nearby peninsula. The special event? At the end of the excursion there was going to be a “Polar Jump” where participants could strip down to their swimsuits and leap off a dock into the icy waters.

Matt and I looked at each other. “I want to do that,” I said, feeling the courage that comes with a third glass of wine. “Me too,” he said, because he is as competitive as I am (and had also had three glasses himself). We toasted our courage and sealed the deal.

(Click this link to see how you can keep your energy alive in your dental practice.)

The next morning we hit the water in our kayaks, and it was absolutely spectacular. It is a seascape dominated by views of old majestic glaciers; often parts of those glaciers break off and bob to the surface. I made sure to grab a piece as we paddled through, so I could later have a drink chilled with a piece of ice that was upwards of 25,000 years old.

We went out again for an afternoon session on the water and as it was time to head back we noticed it was getting cold. Really cold. As the time approached to do the Polar Jump, Matt and I once again exchanged looks. This time we weren’t feeling as brave. “Do we really want to do this?” We decided we didn’t. It was a crazy idea, and besides, what we were trying to prove, and to whom? We agreed to just get back to the ship.

And then on the dock, as we walked back to shore, we passed a woman in her seventies who was heading out to do the jump.

When I got back onboard the ship, I talked to Shelli about my second thoughts and about the old lady who was actually doing this crazy leap into the water. “Are you going to regret this if you don’t do it?” she asked. “I think I will,” I said.

And that’s how Matt and I ended up back on the dock in our swimsuits. The staff tied a safety line to me and I took a run at the water – a dumb move, because when you run and leap you end up going in deeper and longer, but I tend to go all out when I make a decision like this. I wish I could describe what went through my mind when I hit the water, but those kinds of words shouldn’t be repeated here.

I can tell you, however, what it felt like when I was pulled back onto the dock: pure exhilaration. People were cheering. I was given a towel and a celebratory shot of vodka. And I felt utterly and fantastically alive. It’s a moment that will stay with me forever.

So my question is: How often do we do this in life? I don’t mean jump into a frigid ocean. I mean how often do we almost talk ourselves out of something that deep down we know we want to do? And how often do we finally push ourselves to take a chance, only to say, “I wish I had done that sooner”? In a way, the hesitation makes sense, because a part of our brain wants to protect us from risk. But we all know that no real progress is ever made without some risk.

For dentists, it can be things like buying or expanding a practice, or adding technology or staff – you can always find reasons to delay or to decide it’s just not worth the risk.

That’s what we at Spear are here for. I like to think that we are like the crew of the ship that supervised that Polar Jump. We’re there to ensure you proceed under the right conditions, to give you advice, to provide a cheering section, to put the safety harness around you and to pull you back to solid ground when you need it.

But it will still always be up to you to make the leap.

One Thing All Winning Dentists (and all Winners) Do

Two Kinds of Dental Practices ... And Which You Should Strive to Be