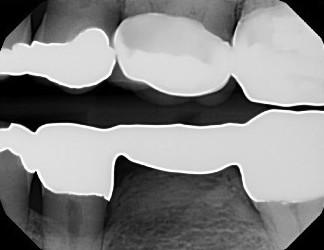 I had the pleasure of meeting a great patient for the first time earlier this year. She had been to her hygienist who identified an area of decay around an abutment for her full gold fixed bridge that had been working for at least 25 years. The bridge was made with a hygienic pontic where the underlying tissue was pressed up tight against the underlying surface.

The first thought is: Wow! This must be a tough area to floss. What if the power to grow this volume of bone could be harnessed and applied in other areas of the mouth? Sub-pontic osseous hyperplasia (SOH) is described in a case report by Islam as a relatively uncommon occurrence. The etiology is unknown, however, contributing factors include genetic predisposition (similar to mandibular tori), chronic gingival irritation (although mostly seen with hygienic pontics) or the stresses transferred from the teeth to the supporting bone as a result of the cemented fixed bridge prosthesis.

The three cases described in Islam’s article, and 39 of 40 cases previously reported in the literature, were identified in the mandible. Typically, the SOHs identified are unilateral even when the patient has bilateral pontics. Histologically, the structure beneath the pontic is described as mature, dense lamellar osseous tissue consistent with underlying normal bone similar to mandibular tori or bony exostoses.

As recommended in Islam’s article, the presence of SOH is not an indication for treatment by itself, and the bony tissue does not require biopsy. These cases do require follow-up evaluation as they could compromise the patient&rsquo;s ability to clean under a pontic, resulting in carious abutments. This looks like an ideal setup for a dental implant supported restoration and certainly this could be restored with a new fixed bridge following modification of the bony contours.

How would you plan your conversation if the patient simply wanted a new fixed bridge?

Leigh Philbrick
July 10th, 2014
I saw one of these 20 years ago. Nice to see the article.
Read Article

FPDs Vs. Implants Part III: Length of Span and Vitality of Abutments

Restorative Design and the Sterile Pencil