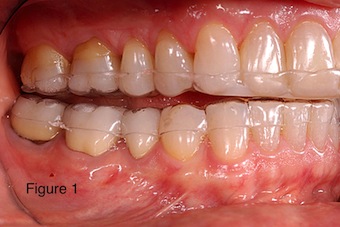 The critical issue regarding anterior intrusion/posterior eruption is the time the appliance is worn each day. I personally tell patients that eight to 10 hours a day is the most I am comfortable with to minimize the risk of developing an anterior open bite. It is possible to make the anterior bite plane on a full arch base plate, and also place a pressure formed Essix type appliance on the opposing arch (Figure 1). You’ll be able to safely have the patient wear the appliance more than eight to 10 hours a day, but you do want patients to recognize the risk.

If the patient wants to wear the appliance during the day and at night, a full coverage appliance is a much better choice but may not reduce clenching muscle activity at all, and may even increase it. Also the full coverage appliance would need to have anterior guidance and be adjusted in a seated condylar position if you want to reduce muscle activity as much as possible, presuming the patient has no joint issues to preclude using a seated condylar position.

What if an open bite develops?

If you do have a patient develop an anterior open bite after bite plane wear, make a new set of models and attempt to hand articulate them. If the occlusion fits fine you haven’t had eruption or intrusion, but more likely mandibular repositioning. If the occlusion doesn’t fit, you probably have tooth position changes and removing the appliance will likely result in the open bite closing over time. 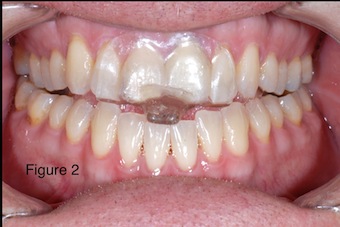 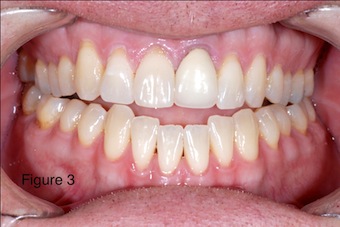 Figures 2 and 3 are examples of a patient who wore a small anterior only appliance and had significant changes in tooth position. These changes are so severe that orthodontic correction will be necessary. Photos courtesy of Dr. Harold Menchel.

The concept of mandibular repositioning is not new, and in fact can be seen even using a full coverage appliance. For most patients their habitual position of occlusion, the intercuspal position, exists with the mandible in a position anterior to the most seated condylar position. This means when the condyles do seat, the occlusion doesn’t fit; most commonly there are contacts only on molars. The response to the posterior only contacts is to contract the lateral pterygoid muscles to hold the mandible in the anterior position where upon closure the occlusion does fit (Figure 4).

As soon as any appliance is placed, unless it is specifically designed to create an interdigitated intercuspal position, the mandible has the ability to move into a more retruded position. This is especially true for an anterior only appliance since there is no posterior occlusion to interfere with condylar seating, but also can happen on a full coverage appliance - especially one that is adjusted weekly into a seated condylar position the first few weeks after it is placed. 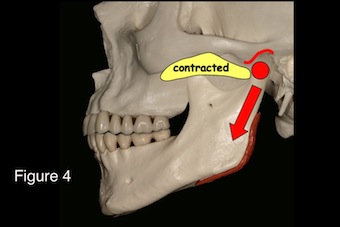 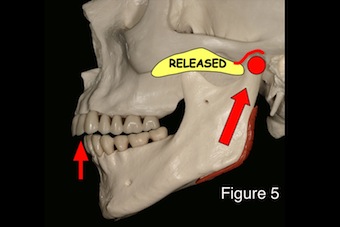 This is why when patients take out their appliance in the morning they describe their bite as not fitting, assuming the appliance moved their teeth. In reality what the appliance did was allow a release of the lateral pterygoid muscles, and the mandible is now in a different position, most often retruded to their normal occlusion (Figure 5).

The good news for most patients is that as soon as the there is recognition the occlusion doesn’t fit, the pterygoids wake up and move the mandible back into a normal habitual occlusal relationship for them. Unfortunately this is not true for all patients, and some stay in a retruded position with an anterior open bite. To my knowledge no literature has described why the muscles don’t wake up and reposition the mandible, but there are certain types of occlusion that appear to be more at risk.

By Frank Spear 7 years ago