Occlusal Appliances: How Do They Impact Muscles? [Part II]

As I mentioned in Part I of this article, it is critical that clinicians realize that different patients may respond differently to the same occlusal appliance. I discussed the research around different appliance designs and the risks with interpreting the data. The following is further investigation into how appliances impact muscles.

What the research says: In spite of my earlier remarks in Part I, I wouldn't discount the research findings as invalid, just not completely reliable for all patients. With that in mind, here are the fundamental findings of how different occlusal appliances influence muscle activity levels. It is helpful to separate the muscle activity levels into those generated during clenching, as opposed to those generated during excursive movements of the mandible.

Research also finds the clenching activity level is affected by how many teeth are touching on an anterior only appliance. For example, there is a reduction of activity levels if an anterior only appliance is used over a full coverage appliance, but even further reduction if the anterior appliance has only the centrals touching as opposed to six anterior teeth. There are potential dangers in reducing the number of teeth touching; however, as there is a significant risk to the teeth actually in contact if the patient continues to clench at a high level, which does happen in some patients. 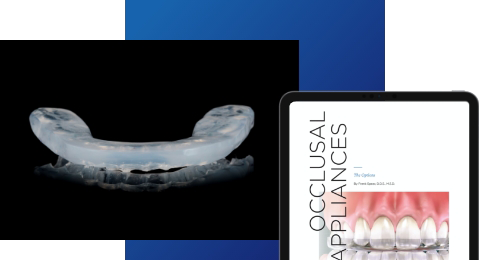 Lateral Pterygoid Activity: The bulk of appliance research leaves out the lateral pterygoid muscle because of the fact that it requires a needle electrode be inserted in the muscle to be able to research it. While research has been done using needle electrodes in both the superior and inferior belly of the lateral pterygoid muscles, I am not aware of any which specifically looked at different appliance designs and their impact on either head of the muscle. Clinical evidence suggests that the key occlusal element that allows for a reduction in lateral pterygoid activity is for the appliance to allow the condyle to seat completely; anterior only appliances and full coverage appliances that are adjusted to a fully seated joint position fit this requirement.

Conclusion: The bulk of the evidence from research suggests that if the patient only has muscle pain, anterior only appliances, or full coverage appliances adjusted to a fully seated joint position with anterior guidance would have the greatest chance for success. But as I said earlier, this doesn't mean they are the only ones that will be successful, or that they will always be successful.

In a future article I'll discuss the role of appliances in managing TMJ pain, as many times that is why the prescribed appliance is not effective.

Occlusal Appliances: How Do They Impact Joints?

Occlusal Appliances: How do They Impact Muscles? [Part I]

By Frank Spear 7 years ago

Occlusion and the TMJ 2