Oxidative Stress and the Use of Antioxidants in Dentistry [Part I] 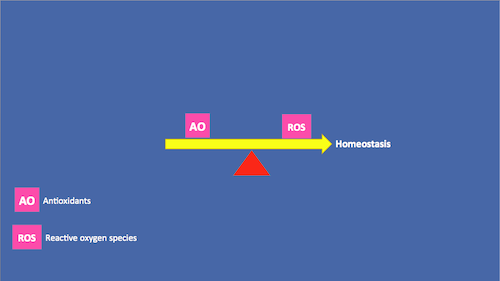 Oxidation is a natural process that occurs 24 hours a day during normal cellular function. Reactive oxygen species (ROS) are continuously produced as byproducts of aerobic metabolism. Oxidative stress occurs when there is a physiological strain on the body that results from an increased production in ROS, or a decreased capability in the body's antioxidant defense mechanisms. ROS are free radicals that are unstable molecules due to a missing electron. They attack other molecules in an effort to regain stability by "stealing" one of their electrons. 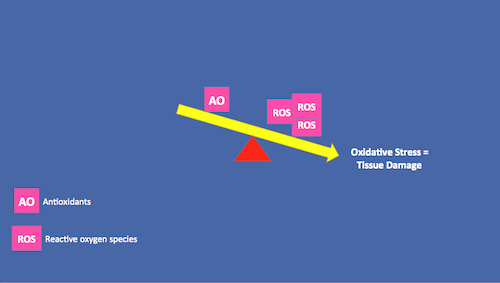 A yellow arrow on a triangle, points downward to Oxidative Stress equalling Tissue Damage. On the left side of the arrow is a square represending Antioxidants. On the right side of the arrow are three squares representing Reactive Oxygen Species.

This chain reaction damages molecules, eventually impairs cell function and potentially causes cell death. The level of oxidative stress is determined by the balance between the rate at which oxidative damage occurs and the rate it is repaired or removed. Cells are generally able to recover from mild or brief oxidative episodes, but severe stress or prolonged exposure can cause their significant damage or death.

Antioxidants are molecules or compounds that work to prevent cellular damage by inhibiting reactions caused by the oxidation process. They neutralize ROS by donating one of their own electrons. Since antioxidants are stable in either form (with or without a missing electron) they stop the stealing process and help to prevent further cell damage. Saliva is the oral cavity's first level of defense against oxidative stress. In healthy individuals, the total antioxidant capacity of saliva is normally able to maintain homeostasis by counteracting mild oxidative damage. When that equilibrium is disturbed by an overabundance of ROS from periodontal disease or other sources, the introduction of additional antioxidants is needed to return the oral cavity to a balanced state.

Sources of increased ROS in the oral cavity include bleaching agents, dental cements, implants, alloys, and composite fillings. In addition, lifestyle and environmental factors including tobacco and alcohol use, carbonated drinks, poor nutritional status, and other chemicals and pollutants, contribute to the development of ROS and oral oxidative stress. 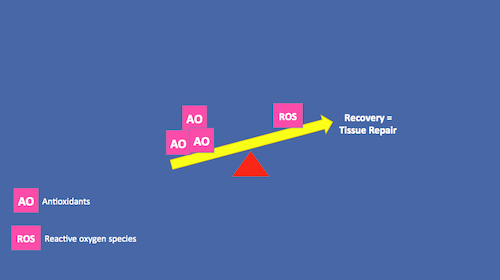 A yellow arrow on a triangle, points upwards to Recovery equalling Tissue Repair. On the left side of the arrow are three squares represending Antioxidants. On the right side of the arrow is one square representing Reactive Oxygen Species.

Oxidative stress is considered a contributing factor in the development of multiple chronic inflammatory diseases including periodontitis, diabetes, atherosclerosis, rheumatoid arthritis, sickle cell disease, and various types of cancer1. In addition, there is a suspected link between oxidative stress and a variety of neurodegenerative disorders including Parkinson's, Alzheimer's and Lou Gehrig's diseases2. The systemic link between periodontitis and heart disease, rheumatoid arthritis, diabetes, Alzheimer's disease and obesity has been well-established 3-4.

Next week: Antioxidants and Wound Healing

Lawrence Gottesman, DDS
August 28th, 2013
Bob: You are right on target. I love the topic and the introduction of this into your curriculum. Dentistry needs more of this. If you want to see oxidative stress, take a look at Steve's blog topic: http://www.speareducation.com/spear-review/2013/08/why-the-recession-on-11/#.Uh4pdz9j7Sg Best, Larry

Shilpa
November 12th, 2014
PROBABLY THE USE OF ANTIOXIDANT IS A BOON TO DENTISTRY,IF WE BELIEVE IN PREVENTION IS BETTER THAN CURE
Read Article

By Robert Winter 8 months ago
Beyond Restoration

By Robert Winter 8 months ago