Never Underestimate the Force Within

Never Underestimate the Force Within 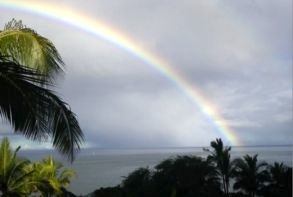 This was the view from my hotel room last week in Hawaii, where I was for a speaking engagement and brief holiday.

It was a beautiful rainbow—the kind of natural phenomenon that is common and breathtaking at the same time; the kind you can't help but stop and stare at for awhile.

We had arrived in Hawaii right around the time that Tropical Storm Flossie (a great name for a storm to hit a gathering of dentists) was due to arrive.

Tropical storms can of course be a great cause for concern on the islands, but as it turns out, Flossie's ferocity had started to weaken before it reached us.

Still, there was some drama. I went out for a scheduled dive but we were unable to go to the usual dive sites because of the unpredictable weather. Dark clouds rolled through and the wind picked up. Things went from sunny to rainy and back again. To top it off, an undersea earthquake was reported nearby. In the lobby of our hotel they posted an advisory, telling us that there was no immediate danger of a tsunami (a word that can really strike fear in anyone on a tropical island) but that if the heavy rain persisted we were to stay inside and wait for further instructions.

Then came the rainbow, and I suddenly went from being concerned about the destructive forces of nature to being captivated by her beauty.

And that's when I stopped to think about how, as human beings, we mirror nature in ourselves. We each have within us the capacity for destruction as well as for tremendous beauty. We have energy that can destroy or create.

In that sense we are, each of us, a force of nature. The important difference is you can control the force you have on the world.

Dapo Olotu
August 17th, 2013
I recently fulfilled my dream of owning my own practice after 13 years as an associate. What seemed to be a wonderful friendship with the practice seller quickly turned sour the moment the contracts were completed. It baffled me that someone who appeared capable of such beauty could turn so ferocious and vicious the moment the monetary transaction was made. It's taken all of the self-discipline in me not to mirror the attitude with which I'd been treated. I shed my last tear over that professional relationship gone wrong yesterday and told myself that my dream was still ahead of me. It might have been a less than idealistic start, but I'm on to a fabulous future! Thank you.
Read Article

By Brandon Stapleton 2 years ago
Beyond Restoration

Converting an Anterior Bite Plane to a Full Arch Splint