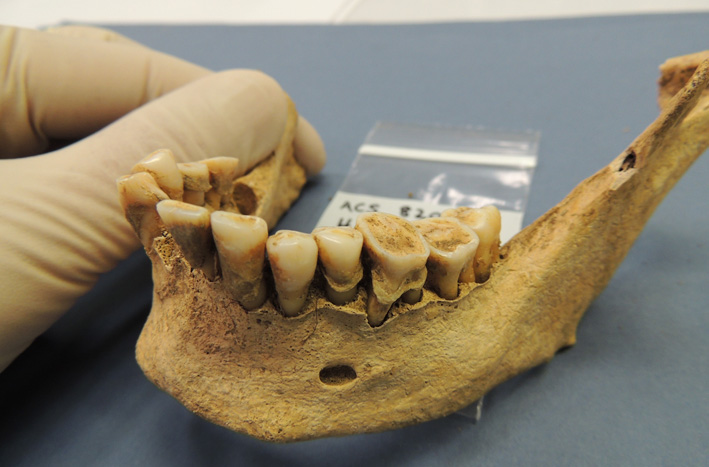 According to a media release, “Ancient Teeth Bacteria Record Disease Evolution”, from the University of Adelaide in Australia, DNA preserved in calcified bacteria on the teeth of ancient human skeletons has shed light on the health consequences of the evolving diet and behavior from the Stone Age to the modern day.

The ancient genetic record reveals the negative changes in oral bacteria brought about by the dietary shifts.

The team, led by the University of Adelaide's Australian Centre for Ancient DNA (ACAD) where the research was performed, recently published the results in Nature Genetics. Other team members include the Department of Archaeology at the University of Aberdeen and the Wellcome Trust Sanger Institute in Cambridge (UK).

According to the study leader Professor Alan Cooper and ACAD Director, "This is the first record of how our evolution over the last 7,500 years has impacted the bacteria we carry with us, and the important health consequences," he says. "Oral bacteria in modern man are markedly less diverse than historic populations and this is thought to contribute to chronic oral and other disease in post-industrial lifestyles."

The release highlights that the researchers extracted DNA from tartar from 34 prehistoric northern European human skeletons, and traced changes in the nature of oral bacteria from the last hunter-gatherers, through the first farmers to the Bronze Age and Medieval times.

"Dental plaque represents the only easily accessible source of preserved human bacteria," says lead author Dr Christina Adler, who conducted the research while a PhD student at the University of Adelaide.

The release points out that Professor Cooper has been working on the project with archaeologist and co-leader Professor Keith Dobney, now at the University of Aberdeen, for the past 17 years. Professor Dobney says, "I had shown tartar deposits commonly found on ancient teeth were dense masses of solid calcified bacteria and food, but couldn't identify the species of bacteria. Ancient DNA was the obvious answer."

The team was not able to sufficiently control background levels of bacterial contamination until 2007 when ACAD's ultra-clean laboratories and strict decontamination and authentication protocols became available. The release explains that the research team is now expanding its studies through time, and around the world, including other species such as Neandertals.

How Dentists Can Support the LGBTQ+ Community

From the Bottom Up

The Susceptibility Equation is Unique for Each Patient