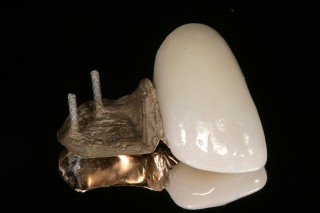 As I have mentioned in previous articles, there are multiple treatment options available for managing patients with missing lateral incisors. Although single tooth implants are typically our primary choice, other treatment options that may be considered include canine substitution or some form of a tooth supported fixed partial denture. 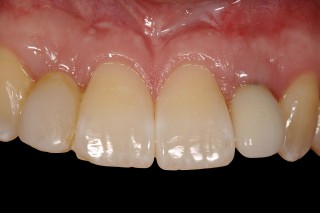 The patient in the photo had congenitally missing lateral incisors and had implants placed in both #7 and #10 sites that failed to integrate. The implants were subsequently removed and the areas augmented. Implants were again placed only to have the #7 fixture fail to integrate a second time. At this point she was seen in my office with two main concerns; she didn’t like the esthetics of the implant restoration of #10 and wanted the #7 area restored. Her stipulation with the #7 site was that “no other surgery be performed.”

Since her teeth were esthetically pleasing to begin with, the cantilevered restoration could be designed as partial coverage (leaving the facial of the abutment tooth untouched). In order to increase the retention of the restoration, a “pin-ledge” design was utilized. Given its size and thickness, the canine was chosen as the abutment. Utilizing the VIP pin kit from Whaledent, 3mm deep pinholes were placed in the cingulum area and on the distal palatal. The most challenging part about the preparation isn’t dropping the pins, but rather placing the groove on the mesial. If the groove is placed too far towards the facial, you risk the abutment preparation being “seen” from the anterior and hence negatively impacting the esthetics.

Plastic impression pins were picked up in the final impression and the model was poured in stone. Gold was chosen as the material for the canine abutment along with a traditional metal ceramic crown for the lateral. The definitive restoration was bonded in place with resin cement. With regard to managing the occlusion, although you can have a centric contact on the cantilever, it is important that all excursive contacts be removed. Controlling the lateral forces on the cantilever is crucial for the long-term predictability of the restoration.

Cars
June 4th, 2013
It should be fun to buy a new car! Driving a new car is such a great experience, and purchasing the car should be fun as well. A lot of people would rather skip the whole purchasing process. Keep the stress to a minimum using these tips.

Joel
June 18th, 2013
Do they still make the VIP kits and what size pins are you using??

Greggory Kinzer
May 17th, 2015
They discontinued making the VIP pin kit a few years ago. That being said, I do have a fairly good inventory of the necessary items that I could supply to you (twist drill, impression pins, platinum-palladium pins). If you want to email me, I'd be happy to help you out.
Read Article

By Darin Dichter 3 years ago