The United States of Dentists [INFOGRAPHIC]

The United States of Dentists [INFOGRAPHIC]

In an effort to see where dentists are needed the most in this country, we put together a infographic that categorizes the states by the amount of dentists currently practicing there, along with some oral health statistics from around the US. 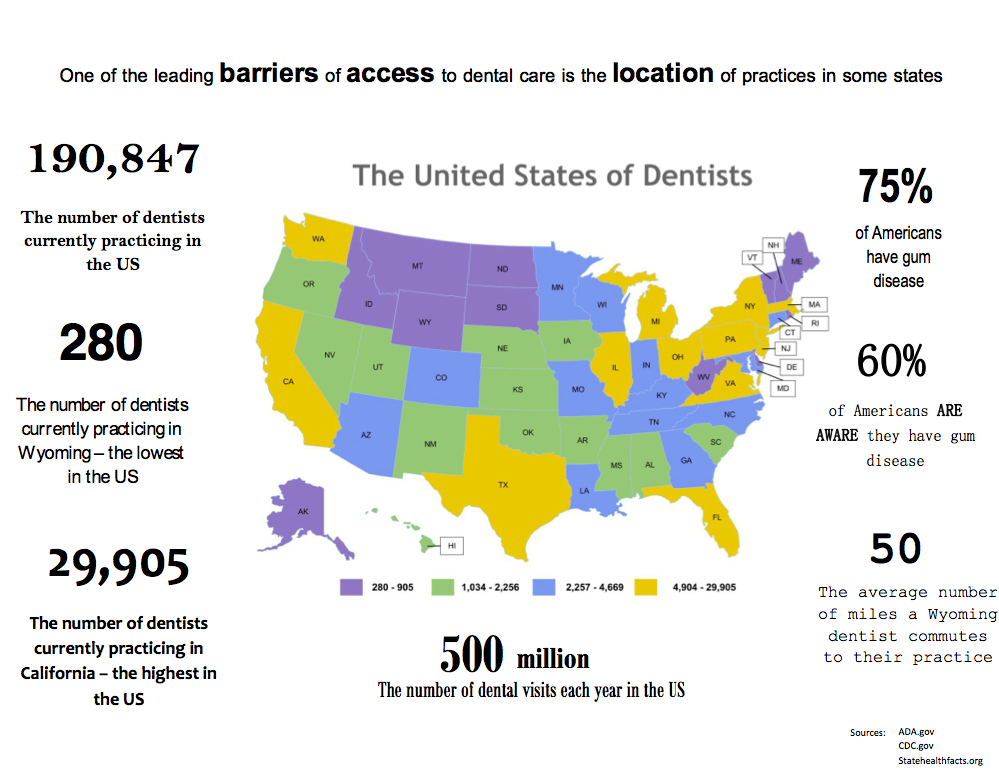 Will Kelly
September 18th, 2012
Be careful this is a slippery slope. In North Carolina our rural areas are considered "underserved". So we got licensure by credential. . . and out of state dentists moved to our metropolitan areas (bringing all the insurance crud from their home states). So we built a dental school in Eastern North Carolina (while dental schools were closing throughout the country). Without fail, the graduates will move to areas where there is a market for dentists (if there still is one after it is saturated). Stand in front of a Wal Mart in Eastern North Carolina and offer a free fishing rod or a free prophy and see what wins. Keep pushing and dentistry is going to end up in the same mess as medicine. Right now we are fortunate that, to a degree, our profession still follows the free market. Socialize dentistry and I guarantee we will stagnate to an urgent care based profession.

Ronald Jarvis, DDS
September 24th, 2012
It makes my eyeballs bulge when folks talk about the 'underserved' without really defining what the term means. When folks talk about a lack of providers or about the 'access to care' problem, I think 9 times out of 10, the real issue is not an actual shortage of dentists, but a shortage of dentists who are brave enough, stupid enough, or desperate enough to see medicaid patients. I'm all three. If medicaid were a more attractive proposition, more providers would participate, would even choose to locate and practice in 'underserved' areas, and most (but perhaps not all) of the 'access to care' problem would go away. People (and dentists too) tend to act in their own financial self interest. Imagine a place with thousands of private-pay, fee-for-service patients ready and wanting to pay for dental care and there are no dentists serving that area. Probably wouldn't take long before a dentist or two or three decide to move in and start serving that area, right? On the other hand, imagine the same scenario, but there are thousands of people who are on government insurance that pays 50 to 60% of average private pay fees and has LOTS of rules and regulations - violation of any one of them could land you in federal prison. People in this area can afford cigarettes, alcohol, iPhones, nice clothes, packaged foods, and lots of soda, sports drinks, and energy drinks. Tattoos too. They don't want to pay for dental care, because they have 'insurance'. Anyone want to go practice there? Didn't think so. Folks would say this area has a 'access to care' problem or is 'under-served'. Another view is that folks in this area don't value dental care because it's 'free'.
Read Article

Why Dentists Need to Know About Smoking Cessation Treatment