Correct an Un-esthetic Implant With a Pediculated Connective Tissue Graft

Correct an Un-esthetic Implant With a Pediculated Connective Tissue Graft 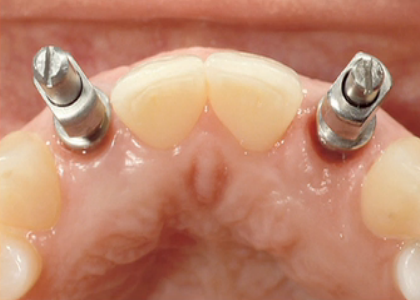 If you haven’t experienced it yet, there will be occurrences where a patient will present with an un-esthetic implant due to gingival problems. In addition, most dentists have had at least one implant procedure that didn’t go quite as well as expected from a gingival esthetics perspective, and wish there had been some method that would aid in delivering an improved result.

For single tooth anterior implants the most common area of concern is the mid facial gingival level. The papilla height around the implant will be dependent upon the interproximal bone on the adjacent natural teeth.

A pediculated connective tissue graft can be used to enhance tissue thickness and height on existing facially inclined implants and can be a great solution for patients who are less-than-happy with the look of their implants.

There are of course limitations with regards to how far to the facial the implant can be and still be retained. In severe cases the implant should probably be removed, bone grafted, soft tissue augmented, and the implant placement started over.

As mentioned, there are several options that can deliver an improved esthetic result for a problem like this, but leaving the implants in and enhancing tissue thickness and height is the least invasive procedure all-around. However, it does require that you remove the crown and abutment to allow the gingiva to migrate over the fixture as much as possible.

The placement of an internal cover screw will prevent the tissue from migrating into the implant and provides the best chance for the gingiva to cover the fixture. It is also necessary to leave a space under whatever form of temporization is used so the gingiva can migrate over the fixture. An Essex type retainer with tooth colored material where the tooth is missing is an easy form of temporization that is tooth supported and can be shortened a millimeter or two apically to allow space for the soft tissue migration.

The graft itself was first described by Wang and Pittman and differs from a traditional CT graft by remaining attached to the palate on the lingual of the implant site. The graft is dissected all the way back to the mesial of the first molar and then flipped or rotated over the implant with the 2 mm healing abutment and sutured into a pouch on the facial of the implant, creating significant gingival height and thickness. It will also be necessary to alter the apical portion of the temporary to remove any unwanted pressure from the graft.

After about six months it is possible to uncover the implant using a punch ideally directed from the pallet so as to not lose any of the facial tissue thickness. The challenge of course is that the implant was facially inclined to begin with, so the temporary and final abutments need to be fabricated as thin on the labial surface as possible to not re-introduce facial recession. Using milled zirconia abutments and high strength ceramic crowns that can be esthetic in thin sections such as e.max lithium disilicate can help prevent over contouring.

By Greggory Kinzer 2 years ago
Implants

By Steve Ratcliff 5 years ago