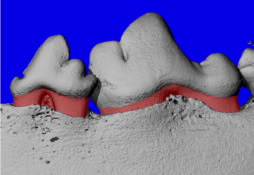 Scientists described another treatment approach for gum disease in a report delivered at the 244th National Meeting & Exposition of the American Chemical Society in Philadelphia. "Our technology uses controlled-release capsules filled with a protein that would be injected in the pockets between the gums and the teeth," said Steven Little, Ph.D., who reported on the research.

"That's ground-zero for periodontal disease, the place where bacteria breed and inflammation occurs. The capsules dissolve over time, releasing a protein that acts as a homing beacon. It guides immune cells to the diseased area, reducing inflammation, creating an environment that fights the disease process and even could create conditions favorable for gum tissue to regrow."

According to the release from the ACS, the researchers from the University of Pittsburgh have evidence from laboratory experiments with mice that the approach does foster healing and regrowth of gum tissue damaged by periodontal disease.

In addition to the common treatments for gum disease used by dentists like scaling and root planing, many scientists are seeking alternative treatments that kill the bacteria that cause it. As indicated in the report, Little's group is taking an entirely different approach. They are targeting the inflammation process. "Although bacteria start the disease, inflammation is what keeps it going and causes progressive damage," Little said.

The release explains the group designed injectable controlled-release capsules containing a protein encased inside a plastic-like polymer material. The polymer is already used in medicine in dissolvable sutures. After the capsules are injected, the polymer slowly breaks down, releasing the protein encapsulated inside.

Little's team injected the capsules into mice and discovered evidence that disease symptoms are dramatically reduced and that proteins and other substances involved in regrowth of gum tissue had appeared. Little said that this finding offers encouragement that the treatment could not only rebalance the immune system, but also prompt regrowth of lost gum and bone tissue in the mouth.

How a Spear Study Club Boosted This Orthodontist's Referral Relationships

By Celina Jimenez 2 years ago
Airway

By Courtney Lavigne 2 years ago