What Lies in the Third Dimension 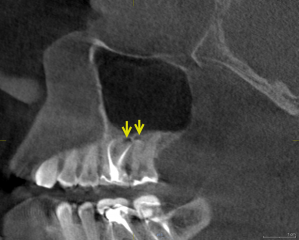 Have you ever had a patient complaining of a toothache and despite your best efforts you were unable to determine the source of their pain? My guess is yes.

Recently I had a new patient come in on an emergency exam complaining of a toothache on the upper left; she was pointing to #14. She had been to her previous dentist more than 30 times in the previous six months trying to resolve her discomfort. She came to me stating she “was done with this tooth and wanted it ripped out.”

My exam showed no remarkable findings, no muscle tenderness or thermal sensitivity, probing depths were within normal limits, the teeth were in proper occlusion, she had no percussion sensitivity and periapical and bitewing radiographs showed no pathology – only what appeared to be very nicely done endodontic treatment on tooth #14.

Rather than “ripping out” her tooth I recommended a CBCT scan to further evaluate things. Happily the CBCT showed clear pathology not evident on her 2D radiographs. The CBCT not only showed radiolucency on the distal buccal root of #14 but also on the mesial buccal root of #15. After discussing our finding she elected to have #14 removed and replaced by an implant, which resolved 90 percent of her symptoms, followed by endodontic treatment for #15 which took care of the remaining 10 percent of her symptoms.

If you have not yet considered incorporating this technology into your practice I encourage you to do so.

Muna Strasser
June 5th, 2012
this is a very nice way to show the improvements of diagnosis with modern technology!

John R. Carson
June 6th, 2012
Thanks Muna, it is amazing how much this technology has shown us that we just could not see before.

Michael Wing DDS
June 6th, 2012
This situation has happened to me too, only it was a fracture in tooth 14 which could not be seen by me, or two other Endodontist but was clearly seen by the CBT. Nice example of how this technology works. It is a technology I would not want to practice without now.
Read Article

How CBCT Saved Our Keisters

By John Carson 7 years ago